Misplaced optimism from the Bank of England GovernorBy Tom O’Leary

The Bank of England Governor has declared that the UK economic outlook is improving. He may be right in a limited sense. The recorded growth rate of the 1st quarter of just 0.2% may not be as dismal in subsequent quarters. But there is little room in the medium-term outlook for misplaced optimism.

Carney said, “A number of indicators of household spending and sentiment have bounced back strongly from what increasingly appears to have been erratic weakness in Q1. The UK labour market has remained strong, and there is widespread evidence that slack is largely used up. Pay and domestic cost growth have continued to firm broadly as expected. Headline inflation is still expected to rise in the short term because of higher energy prices.”

But this only highlights the misconceptions about the drivers of economic growth and its consequences. The first indicators Carney relies on are Consumption data. But Consumption growth cannot drive economic growth, and is destined to fall back unless production and living standards are rising.
Consumption is a consequence of output, not a contributor to it. The growth in Consumption therefore requires the growth in output. Chart 1 below shows the real GDP growth rate (in blue, on the right-hand scale) alongside the proportion of GDP in real Final Consumption Expenditure (orange, on the left-hand scale).

Chart 1. UK Real GDP Growth and the Proportion of Final Consumption Expenditure in GDP, 1970 to 2016 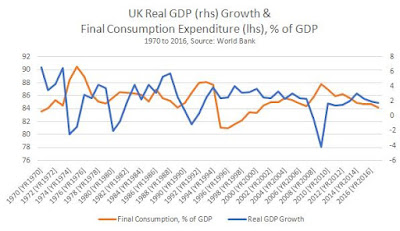 This apparent correlation between the falling proportion of GDP directed towards Investment is that it is associated with a decline in the growth rate of GDP. Peaks in Consumption are associated with troughs in GDP growth. If we take prolonged periods, such as the build-up to the Great Recession in 2008, this included a rise in the proportion of Consumption in GDP from 81% at the end of the 1990s to a peak of 87.8% in the depth of the recession in 2009. 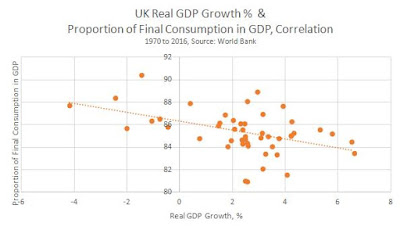 Correlation is not causality. But the data completely belies the notion that economic growth, and the rise in living standards that growth allows, can be driven by rising Consumption over the medium-term.

Instead, the relationship is better understood as the relationship between Consumption and Investment, which both follow output. If output is not consumed, but saved and invested, it lays the basis for further output. However, if all output is consumed, then there is no possibility of increased output, and it will decline over time as capital (the means of production) are themselves consumed in the production process (through wear and tear, dilapidation, and so on). It is the increase in Investment which leads to the development of the means of production, which sustains an increase in production.

On this fundamental point, Carney’s assessment is wrong, even if better quarters ahead are possible in terms of GDP compared to the 1st quarter of 2018. Improving household spending and consumer sentiment cannot sustain increased growth over the medium-term.

The decisive factor is Investment. And here, the outlook is very far ‘bouncing back strongly’. Chart 3 below shows the rate of growth in Investment (Gross Fixed Capital Formation). 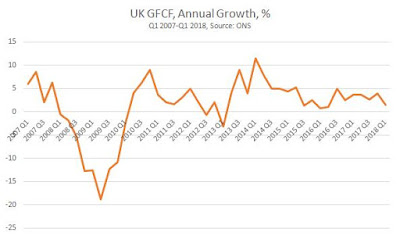 This Investment weakness and lack of growth in productive capacity is the source of Mark Carney’s other concern of rising price pressures. It is the dearth of Investment which is causing capacity constraints, from which he sees rising inflationary pressures. But even that standard interpretation may be misplaced.

His view that the strength of the labour market is leading to pay pressures is belied by the fact that real earnings growth remains close to zero. The focus on the falling unemployment rate may be misleading, along with the rise in the employment rate, both of which are at levels not seen in a generation or more. 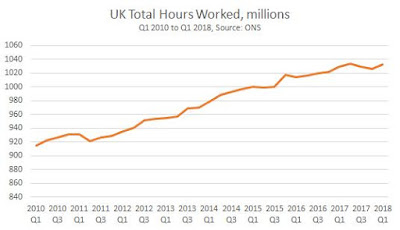 Although there are more people in work (and fewer unemployed workers) they are working shorter hours. Therefore total hours worked are not increasing. The growth of part-time working, zero hours contracts and perhaps even shorter time for full-time workers do not reinforce the idea of a labour market that is going to produce much higher wages.

The lack of Investment means that the significant creation of jobs over the last period is dominated by lower productivity, lower-paid jobs. It is also at the same time leading to genuine capacity constraints. The Bank of England Governor’s optimism is misplaced. Consumer spending cannot sustain stronger growth over the medium-term. So, the weakness of Investment means that a strong recovery from here is highly unlikely.