.399ZThe high stakes in the battle for union rights in Wisconsin

There are reports that protestors in Tahrir (Liberation) Square in Cairo are among the worldwide donors of pizza to the protestors in Wisconsin! The protestors have occupied the Capitol Building in an attempt to block passage of a union-busting bill adopted by the State’s Republicans. While the world has been enthralled by the Arab revolution, its militants have provided a practical demonstration of international solidarity.

The struggles in Egypt and Wisconsin are evidently not on the same plane, but they are linked. The global economic and financial crisis which began in 2007 has impacted all countries. In the colonial and semi-colonial world, the daily struggle for food has grown over into a wider uprising against unemployment, economic degradation, autocracy and national humiliation. In the ‘Western’ economies, the defensive struggle against the ‘austerity’ drive includes cuts in public spending, unemployment and falling standards of living. But in both cases it is in response to a determined effort to ensure that is workers and the poor who pay for the crisis- and that capital will restore its fortunes at the expense of labour.

In Wisconsin Governor Walker is leading an assault on collective-bargaining by all State employees, with no negotiating rights on benefits and pay linked to the consumer price index- challengeable only by State-wide referendum. This is a classic tactic of pitting public workers against those in the private sector, who are themselves experiencing a sharp fall in living standards and watching their publicly-provided services being cut for everything from teachers, to firefighters, police and sanitation.

The US media had overwhelmingly supported the Governor, with the Wall Street Journal recycling the right-wing talkshow epithet ‘Mad Town’ to describe the protests against Walker’s ‘very modest proposals’. Some the media hostility has retreated, though, in the face of opinion polls showing 61% US public opinion approval for the protestors, who have at times numbered just under 100,000, with only the top income earners supporting the measures . Instead, the media has attempted to shift the terrain by portraying the local unions, who have little recent history of militancy, as ‘thwarting the democratic will’ by opposing the recently-elected State legislature. This is an entirely specious argument as it overlooks the small matter than no elected official stood on anything like a union-busting programme in the election.

The unions have already agreed pay and benefit cuts as well as job losses. The further assault by the governor has a different agenda, that of union-busting, and the consequent drop in living standards which would follow from it is what is at stake.

The type of wage reductions that are envisaged have already been achieved in the US private sector. Furthermore during the last significant economic crisis of US capitalism, Ronald Reagan broke the air-traffic controllers’ union PATCO (who had supported his election!). Infamously, the union leaders were arrested, jailed and fined, having been led manacled and bound for the TV news. The union was fined and then broken by decertification. A clear massage was sent to all other unions.

As a result of such methods, In the US private sector union density declined from 30% in the 1960s to 7% currently. Union militancy plummeted. Real weekly earnings fell from $300 in 1979 to $260 in 1996, despite rising economic activity and productivity. Former Federal Reserve Governor Alan Greenspan called the breaking of PATCO Reagan’s ‘most important domestic initiative’. 1

But the US public sector has remained much more highly unionised – although at a level that is low by international standards. Just under 40% of US public sector workers are unionised. In some states, such as California and New York, that proportion is much higher. The aim is to break US unions in the public sector in order to drive down wages generally across the whole economy. In a familiar story, all this has nothing to do with reducing the US budget deficit- Wisconsin turned down Federal funds for investment in transport and broadband which would have generated new revenues. Already States such as Ohio and Indiana have signalled they will follow suit, and in a complete distortion of reality, a much larger group of Republican-led states describing themselves as the ‘right to work’ states, intend to introduce legislation even further curbing union power.

Of course all this has implications not just for the US but in all the Western economies which take their policy lead from it – most especially Britain. While the Financial Times states it regrets the false claim that the union-busting is about saving money, it supports the offensive, likening the US assault on the the public sector unions to Murdoch’s attack on the print unions in the UK and expressing the hope that unions have had their day.

Before Murcoch’s assault on the print unions the Thatcher government’s introduction of severe anti-trade union laws, combined with the defeat of the miners’ strike of 1984-85, devastated trade union membership for a generation. As Chart 1 below shows, labour’s share of national income fell sharply as a result. The Tory-led government in Britain, led by the Tory Mayor of London, have already discussed curbing unions in the public sector and banning strikes. They, and all the reactionary forces in the world such as the tottering Arab regimes, which have faced sporadic strike protests to underpin the uprisings, would only take encouragement if the Wisconsin Governor is successful. Wisconsin may not at present be receiving the same attention as the truly historic events in the Arab countries but it deserves close attention by those who stand for progress left and total support by those who want to defend living standards everywhere. 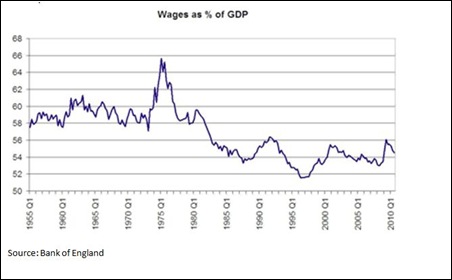 1. Separately, Greenspan has argued that Reagan’s great global achievement was the overthrow of the Soviet Union, and the US boom that followed was a result of the capital outflow then from the whole of Eastern Europe. However, since that led to the US bubble, he has since modified this to suggest that the fall of the Berlin Wall led to the bubble