.759ZThe government and Bank of England set a course to undermine recovery

This week it was revealed from the minutes of the meetings of the Bank of England’s (BoE) Monetary Policy Committee (MPC) that there is a growing faction in favour of an immediate rise in interest rates. Two days later the revised UK GDP data for the 4th quarter of 2010 was released showing that the economic contraction had in fact been even sharper than previously estimated – a fall of 0.6% in the quarter. The official statisticians now concede that, while heavy snow exaggerated the decline, the economy would have contracted even without it by falling 0.1%.

The pattern of MPC voting had already shown that two members at the previous meeting had voted for a 0.25% rate rise. This grouping has now hardened and expanded with to one member voting for an immediate rate rise of 0.5% and two others supporting a 0.25% hike. This faction thoroughly misunderstands both the current trends in the British economy as well as having a flawed theoretical framework.

All MPC members will argue that their role is to anticipate trends in the economy and look beyond the immediate data. But for the majority, the MPC members who are drawn from the Bank and the two other proponents of higher rates, this confidence in their own approach seems misplaced.

Short term economic forecasting is always fraught with difficulties. Because economic data is always released after the fact, and policymaking takes place to affect future activity, formulating the appropriate policy has been likened to ‘driving a car while staring in the rear-view mirror’. There is therefore a huge premium placed on any evidence of future activity.

The chart below is compiled from the BoE’s Agent’s report, which compiles survey evidence of the outlook for economy from 700 businesses across all the regions. This report is relied upon by the Bank and others as a forward-looking series of surveys which looks beyond the published economic data. 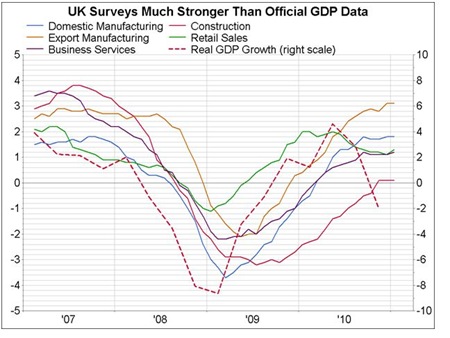 Gavyn Davies, in his blog in the Financial Times, is among those who relied on this evidence when arguing that the initial GDP estimate was ‘too bad to be true’ and despite the downward revision to GDP he continues to argue that there must be a sharp rebound in activity.

The trouble with relying on these surveys is that, although they purport to be forward-looking data, they are actually lagging indicators – and based on business sentiment, which is hardly immune from government and media efforts to talk up activity. Take a look at the chart. GDP began to contract in early 2008 – before any of the surveys turned negative. And the only one that came close to matching the trough in GDP was retail sales. The evidence therefore shows these surveys are lagging, not leading indicators.
Take another look at the chart. Retail sales have been trending down since mid-2010 and the most up-to-date survey from the CBI (which is not shown in the chart) shows sales plummeting in February. To get back to flat, or zero growth for the latest two quarters combined, GDP in the 1st quarter of 2011 will have to rise by 0.6%. To get to something like trend growth over the 2 quarters, which is usually held to be 2.25%, GDP in the 1st quarter of 2011 will have to rise by 1.7% – an extremely unlikely development.

The reason this error can be made in interpretation of the data is probably that it conforms to a preconceived notion – the misplaced idea that growth will rebound sharply, which is itself based on an incorrect theoretical framework. Linked to this is the notion of an ‘Expansionary Fiscal Contraction’ (EFC) – the idea that that an economy can expand even while government spending its cut severely. However, the IMF has examined more than 30 episodes of EFC identified by the original authors of this concept, and found only two where the economy did expand – Denmark from 1983 and Ireland from 1987. 1

After the worst recession since the 1930s, the current recovery is also set to be the weakest since that time. This too runs counter to the prevailing orthodoxy which, until relatively recently, held that the sharper the recession the more rapid the rebound.

There is likely to be positive growth recorded in the 1st quarter of 2011, if only because some activity was held over from the 4th quarter of last year, especially in sectors such as construction. However, as already noted, merely to achieve zero growth over the two-quarter period would require a rise of 0.6% in 1st quarter 2011 GDP, while anything like trend growth would require 1.7% growth in the quarter. This is not unprecedented, but in the current environment of reductions in government spending, and flat income growth, it seems highly unlikely.

The greater detail provided by the latest data release shows that the renewed downturn in investment (gross fixed capital formation) accounted for two-thirds of the 0.6% decline in GDP. Precise information will await the final data release, but business investment fell once more in the 4th quarter and the private sector’s contribution to construction investment is also likely to have been negative. In the data up to the 3rd quarter of 2010, the private sector’s investment strike was responsible for three-quarters of the recession.

From the perspective of businesses, this is a rational response to the government’s own announced, but as yet unimplemented, programme of spending cuts and tax increases for average incomes and the poor. These cuts will only begin to bite in the 1st quarter of this year. But the fanfare with which they have been announced means that any private firm dependent on contracts for schools rebuilding, local authority spending, hospital upgrades or in any area of central or local government spending could only expect lower orders. Lay-offs, short-time working and cutbacks in investment are inevitable.

Renewed economic weakness and rising unemployment this year are a function of Tory-led government policy. It seems as if the MPC is set on a course to hike interest rates later this year – and will pile on the misery.

1. Even considering these two cases in Ireland, the IMF ignores the extremely large subventions from the European Union at that time, an external source of investment which boosted growth dramatically. In the case of Denmark, the present author is not in a position to assess the underlying dynamics, but it should be noted that the Danish fiscal contraction was minuscule compared to current government policy in this county and elsewhere, less than 0.5% of GDP.