In a recent piece for The Guardian the argument that government spending led the very weak recovery has been reviewed in the light of the publication of the final GDP data for the 2nd quarter of 2013.

Because of revisions to the data, it is no longer statistically correct that the entirety of the recovery is accounted for by government spending. The final release from the Office for National Statistics (ONS) shows that real government current spending began to rise after the 3rd quarter of 2011. By the 2nd quarter of this year government consumption had risen by £7.7bn. Over the same period real GDP has risen by £11.7bn. As a result, the rise in government consumption accounts for two-thirds of the weak recovery over the same period.

Therefore it remains the case that it was not austerity that led to the very weak recovery. Instead, rising government consumption led the recovery and statistically accounts for two-thirds of it. Changes in GDP and its components are shown in the chart below, from Q3 2011 when government consumption began to rise. 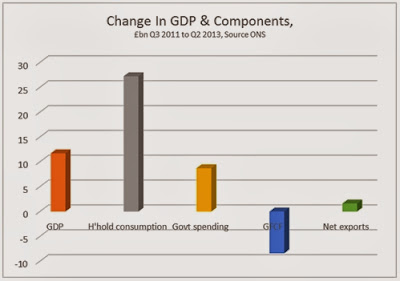 It is notable that household consumption is also rising and is the largest single contributor to growth over the period. Meanwhile, despite all official claims to the contrary investment continues to decline.

Since the recession began in 2008 the total decline in GDP has been £52bn and despite all talk of recovery the economy is still 3.3% below its prior peak. This is the worst performance in the G7 apart from Italy. 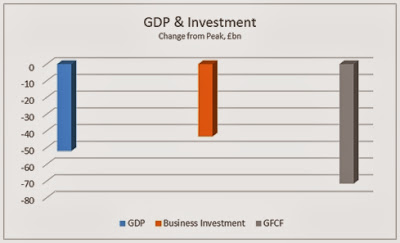 This reproduces all the worst aspects of British long-term economic decline. Consumption is rising while investment is falling. No economic theory supports the idea of consumption-led growth. This is for the simple reason that if the productive capacity of the economy is not being increased simultaneously through investment, then all that is being consumed is that productive capacity.

Despite much fanfare the government has not added any investment at all during its time in office. Much of the large-scale investment currently taking place such as Crossrail was inherited from the previous government and difficult to cancel. Where it could cancel investment it did so, such as the building programme for schools.

The government is content to cut investment while increasing its own consumption and belies any notion the deficit-reduction or sustainable recovery are the goals of economic policy.

To invest in plant, machinery, equipment (including transport equipment and facilities) is to expand the means of production. Since the whole purpose of austerity is to drive up the profit rate of private capital, increasing state-led investment is ruled out. This would place an increasing proportion of the means of production into state hands and not in the hands of private capitalists. It is also why the government is willing to cajole, subsidise and even bribe firms to invest but unwilling to invest on its own account. The lack of success in this field is attributable to fact that those same firms do not yet judge profits to have recovered sufficiently to risk increasing investment.

Therefore there remain only two paths out of the current crisis. The current weak recovery is only supported by increasing government consumption and is not sustainable (although it may be the intention to continue this up to the next election). The private sector-led resolution of this crisis sought by the government requires an increase in the profit rate to be achieved by cutting wages, lengthening the working day and scrapping existing productive capacity. The alternative solution remains state-led investment with the government directing investment in key sectors of the economy, taking over a number of them where necessary.