There is an old joke, not a very good one, that the definition of a consultant is someone who you pay to tell the time who then asks to borrow your watch. Osbornomics, the specific variant of austerity economics that operates in Britain is similar.

The British economic ‘recovery’ is the centrepiece of the Tory election campaign and has been blessed by the IMF as a model. But the recovery is entirely fake. On some of the most important measures of average living standards the economy has at best stagnated over 5 years, on others they have fallen. The majority of the population has seen their real living standards decrease. The Tory election slogan should be, “You’ll never have it so good again”.

The essential con-trick of Osbornomics can be illustrated in one chart, Fig. 1 below. This shows the household savings ratio, the proportion of savings relative to household incomes. 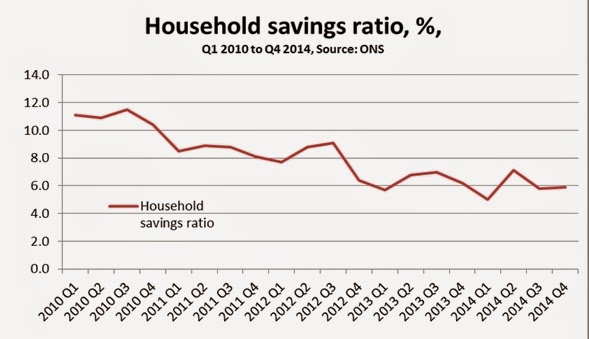 The Tory-led government came to office when the household savings ratio was 10.9%. In the final quarter of 2014 it had fallen to 5.9%. The ‘recovery’ is essentially driven by this fall in household savings, which is equivalent to approximately 3.75% of GDP. But, as already noted real living standards have not been rising. The household sector has been running down savings in order to finance consumption. This is the epitome of British boom-bust cycles since the Second World War, although formerly there was at least some increase in living standards for a period. This promises to be a boom-bust cycle without the preceding boom.

The run-down in household savings highlights a key fallacy of government policy, which it claims is focused on reducing government deficits and debt. In Western Europe the entire economic debate is dominated by the distraction of government finances. In most of the rest of the world, and this means overwhelmingly in countries that are growing more strongly than Western Europe or Britain economic policy debate centres on the issues of growth. This is not only true in fast-growing Asia and Africa, but also in the more sluggish Americas, including in the US where growth rates have been stronger than Western Europe since the recession began, and yet remain feeble by historical comparison.

In Britain, to the limited extent that government deficits have been reduced, as the economy has been stagnant government deficit-reduction has relied on increasing borrowing elsewhere, among households. This illustrates a general truth. Savings and lending must equal each other (aside from money stuffed under the mattress or similar hoarding). All borrowing/lending is a transaction which creates both an asset and a liability; a lender and a borrower.

In common with other Western European countries, Britain’s programme to reduce its government deficit has relied on reducing the savings/increasing the borrowing of the household sector. But in the mainstream economics textbooks a normally functioning industrialised economy is supposed to include a household sector that is acting as a net saver (for big purchases, for retirement and so on). It is the business sector which is supposed to borrow to supplement its own profits in order to invest. In fact, it is this process which is mediated through the banks and which its supporters claim is the uniquely positive attribute of capitalism. Relying on falling household savings to finance consumption cannot lead to increased productivity and is inherently unsustainable. 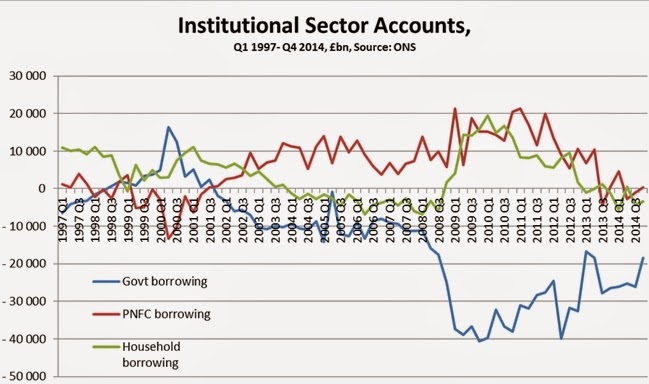 Over a prolonged period and well before the 2008 to 2009 recession businesses (PNFCs) have not been performing their allotted role. Businesses have been savers. The pre-recession boom was financed by a run-down in household savings. As PNFCs started to increase their savings once more at the end of 2006 the government began to borrow. It was only after this period, in late 2008 when the recession had already begun that households sharply reverted to their allotted role and increased their savings once more. Because both the business and the household sector were now significant savers, the government was obliged to increase its borrowing.

The austerity policy attempts to address this imbalance by decreasing the government’s borrowing by cutting its spending and increasing its income. It does this by forcing a reduced saving of households, through raising VAT, cutting social security benefit, cutting disability benefits, public sector pay and pensions and so on. At the same time it has lavished funds on the private sector businesses (cutting corporate taxes, privatisations, and so on) in order to increase their incomes (profits) and eventually to increase their spending and borrowing.

Economically this policy has failed. The government deficit remains stubbornly high and both living standards and GDP are stagnant. Most importantly the austerity to date has failed in its central purpose which is to revive the profitability of British companies, which is the only conceivable basis on which they could be willing to increase investment. Fig.3 below shows the trend in the profit share of UK companies since 1995. At most the policy of austerity has stabilised the decline in profitability and prevented a further fall. But this is very far from a recovery in profits (and even further from a recovery in the profit rate) which would lead to an autonomous rise in private sector investment. 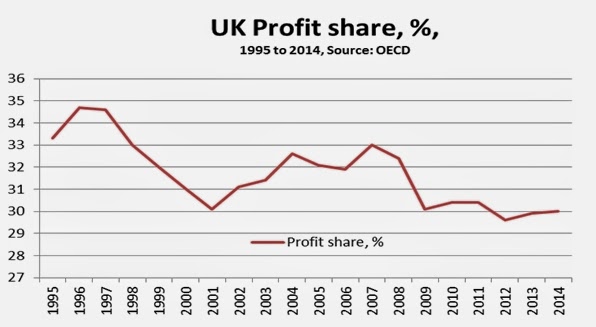 Austerity back on the agenda

For a combination of economic and political reasons the Coalition government stopped implementing new austerity measures midway through the current Parliament. SEB identified this at the time, and now it has become a rather more commonplace analysis. It was this halt to new austerity measures combined with the effects of Quantitative Easing and other government measures to boost consumption which have led to the unsustainable upturn in economic activity.

But a faltering economy and plunging Tory opinion poll ratings meant that the drive to push down the savings rate of households also had to be suspended. With the government attempting to lower its own borrowing and businesses showing little sign of investing rather than saving profits, the necessary savings had to come from another source. This was the ‘Rest of the World’ (RoW) sector in the national accounts, which is overseas investors.

For ease of presentation borrowing from the RoW was not shown in Fig. 2 above. But given that the savings of both the household and PNFCs sectors have been static in the recent period, it is worth illustrating just the growing dependence on borrowing from overseas and the government deficit in Fig. 4 below. 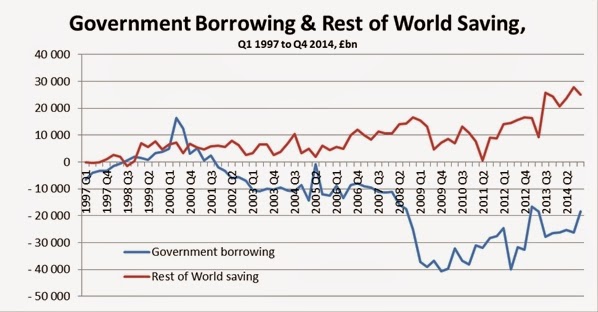 The business expansion before the recession was in part financed by increased overseas borrowing (red line). At the end of 2007 the level of government borrowing in the final quarter was almost exactly equal to the level of savings by the Rest of the World. But the effect of the recession was to decrease consumption financed by borrowing from overseas. In the 2nd quarter of 2011 the level of borrowing from overseas was less than £1bn even though government borrowing in the same quarter was almost £32bn. The savings then were supplied by both the households and PNFCs (as shown in Fig.2).

Since that time the quarterly level of government borrowing has fallen by £13.5bn and the level of borrowing from overseas has increased by approximately £24.5bn. It is this increased borrowing from the RoW which has allowed the government deficit to fall while there has also been a simultaneous modest upturn in investment and consumption.

This is unsustainable. At a certain point the demand for overseas savings exceeds the willingness of overseas investors to lend. The British economy is increasingly dependent on borrowing from overseas and when there is a sudden withdrawal of funds living standards in Britain will fall dramatically once more. Traditionally in Britain this has been accomplished by a ‘balance of payments crisis’ and now more usually relies on a fall in the pound.

It is therefore completely ridiculous for Tory supporters, or the head of the IMF, to claim that Britain’s recovery offers a model. The world cannot increase its borrowing to finance consumption from another planet. It is not even sustainable in Britain.

The requirement to increase private companies’ profitability is the fundamental driving force behind the proposed resumption of austerity after the general election. It is quite possible too that there will be a renewed crisis to accompany it at a certain point, with overseas investors unwilling to continue financing an increase in British consumption, unsupported by an increase in production or investment.