The crisis of all the western industrialised economies is one brought about by the refusal of firms to invest, an investment strike. SEB has previously shown that for the Western economies as a whole the investment strike is leading to two simultaneous trends. While the portion of profits that remains uninvested is growing, payouts to shareholders are reaching record levels and there is a growing cash mountain held by firms.

This article in The Guardian by the present author highlights that process in Britain.

The chart below illustrates the growth of uninvested profits (and does not appear in The Guardian article). 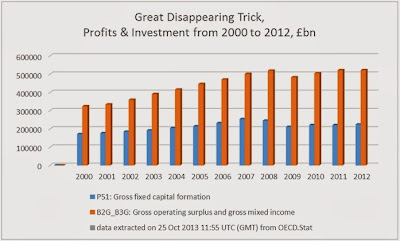 There happens to be a neat coincidence between the current crisis and the combined hoarding cash and the payout to shareholders. Up to the 2nd quarter of 2013 (the 3rd quarter data are not yet available) investment had fallen by £75bn, far more than the decline in GDP (now at £40bn). £75bn is almost exactly the same rate at which companies’ cash hoard has been growing annually since the crisis began in 2008. It is also slightly exceeded by the anticipated payout to shareholders in 2013 of £80bn. Far from being ‘no money left’ these two sources alone, shareholder dividends and the growing cashing mountain, are double what is required to resolve the current crisis.

Recently government ministers have taken to begging companies to invest their cash mountain, after cajoling and bribery have both failed. This can be illustrated through the government policy of cutting corporate taxes and the fallacy that this will spur investment. In 1970 corporation tax was 40% and it has been slashed by this government on the road to a 20% rate, but the investment rate has fallen by around one third.

None of these government efforts will work. Privately owned firms are driven by the concept of ‘shareholder returns’, which is itself counterposed to economic well-being for the overwhelming majority of the population. For them, only the restoration of profits will encourage investment, not pleas for the general good.

The soaring level of uninvested profits, and their diversion towards dividends and a growing cash mountain is the great disappearing trick of the current economic crisis. Until it is resolved the fundamental source of the crisis will remain unaltered.