The release of the second estimate of GDP in the 3rd quarter of 2013 marks an important milestone in the current slump. The fall in investment has for long been the driving force of the current crisis and in fact preceded it. As in many other countries investment (Gross Fixed Capital Formation) in Britain began to fall before the recession began. It also statistically accounts for the recession as the fall in investment is larger than the total fall in GDP.

With the publication of the latest GDP data it is now the case that the decline in business investment alone more than accounts for the entire slump in GDP in the current crisis. It is always possible that the data could be revised substantially with the release of the third estimate in the National Accounts data (and could be revised later). But the most recent data show that the total fall in GDP since the 1st quarter of 2008 to the 3rd quarter of 2013 is £40bn. Over the same period the total decline in investment (GFCF) is £61bn. This includes investment by firms, by government and by private households. But it is firms that play a dominant role in the British economy and its level of investment.

The decline in business investment now amounts to £42bn and exceeds the total decline in GDP of £40bn. These are shown in Chart1 below. 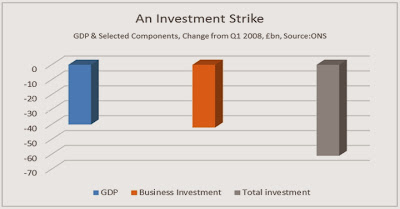 The fact that the decline in both business investment and total investment can exceed the decline in GDP is accounted for by the fact that other components of growth have increased. Again, the data is subject to revision in the final release (on 20 December). But both government consumption spending and net exports have increased. The change GDP and its main components since the 1st quarter of 2008 are shown in Chart 2 below.
Chart 2 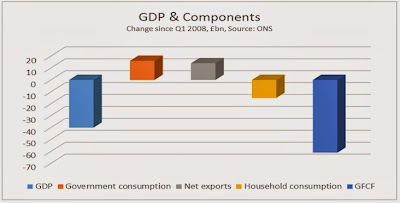 Zero growth in consumption is hardly to be commended. Yet it is much stronger than the performance of GDP in aggregate. This belies any notion that weak demand is driving the slump. There are a series of variants of this idea, that the economy lacks ‘effective demand’ or is suffering from ‘under-consumption’ and so on.

It is still the case that increased public sector investment is the only viable means of resolving the crisis that doesn’t lead to further misery for the majority of the population.