.649ZChina accounts for 100% of the reduction in the number of the world’s people living in poverty

In 2010 Professor Danny Quah, of the London School of Economics, noted: ‘In the last 3 decades, China alone has lifted more people out of extreme poverty than the rest of the world combined. Indeed, China’s ($1/day) poverty reduction of 627 million from 1981 to 2005 exceeds the total global economy’s decline in its extremely poor from 1.9 billion to 1.4 billion over the same period.’ The aim of this article is to analyse the situation taking data published three years after Quah’s analysis; look at the trends not only of extreme poverty, which the World Bank calculates using expenditure of $1.25 a day or less; examine a slightly wider poverty definition ($2 a day expenditure), and compare the trends in other regions of the world economy.

The conclusion is simple. Quah’s conclusion still holds. China is responsible for 100% of the reduction in the number of people living in poverty in the world. This finding is the necessary backdrop to any serious and informed discussion of the role of China in the world economy and its contribution to human rights.

There are many remarkable economic statistics about China.

Nevertheless, impressive as such statistics are, from the point of view of human welfare it is another number which dwarfs all others: the contribution of China to the reduction of human poverty not only within its own borders but in its impact on the world. The astonishing fact remains that China has been responsible for the entire reduction in the number of people living in absolute poverty in the world!

To show this the table below gives the number of those in China and the world living on expenditure less than the two standard measures used by the World Bank to measure poverty. These are the criteria for extreme poverty, expenditure of less than $1.25 a day ($37.5 a month) and those living in poverty – expenditure of $2 day ($60 a month). Charts showing the trends are at the end of the article. 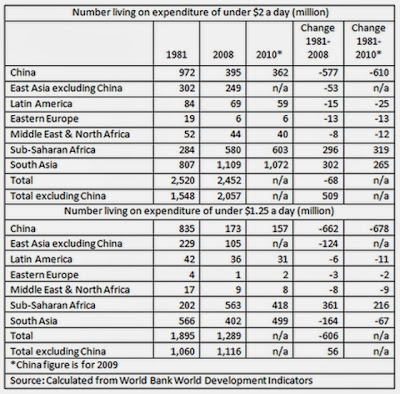 It is therefore almost impossible to exaggerate what a contribution not only to its own people but to the welfare of the whole of humanity China’s economic progress has made. Without China there would have been literally no reduction in the number of world’s people living in poverty.
The gigantic impact of this on human well-being is not only in its direct effect on personal income and expenditures. It is also in its indirect consequences for human welfare. To take simple examples 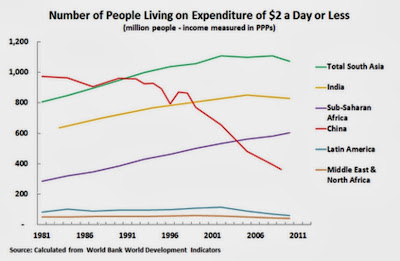 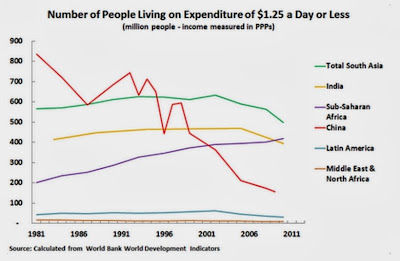 This article originally appeared at Key Trends in Globalisation