Over the medium-term the compound effect of growth differentials of this magnitude is very large. If a 3.3% differential in growth were maintained over 25 years, the Developing Economies would double in size relative to the HICs.

Turning to the performance of the HICs alone, the chart below shows World Bank data for their gross savings and investment (Gross Fixed Capital Formation) as a proportion of GDP (left-hand side). The growth of GDP is the grey line shown on the right-hand side.

What is clear is that all three variables are in a downtrend. That is, both the cyclical high-points and low-points become progressively lower over time. The slump in activity in 2008 and 2009 is the exception not the rule. The rule is a steady downtrend in activity. 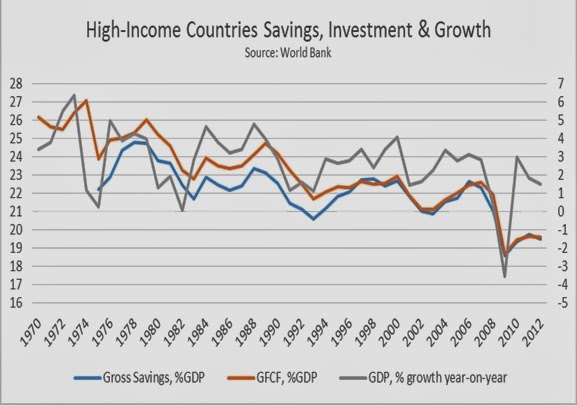 Savings are the basis for investment. Of course savings can be supplemented by borrowing but as both the interest and principal on debt must be repaid at some point, debt can only serve to reschedule the time when savings are used for investment.

It is the declining proportion of GDP devoted to investment which is the primary determinant of the slowdown in GDP growth. All output is either consumed or it can be saved for investment purposes. It is only with the accumulation of capital through investment that economic activity can expand.

GDP growth in the industrialised countries is in a long-term downtrend because economic activity is determined by the declining rates of savings and investment. The ‘turning-point’ for the HICs may only be growth is no longer falling. But it is not in an uptrend.

However it is also notable that from the mid-1970s to the late 1990s investment exceeded the gross savings of the HICs. This can only arise by the HICs drawing on the savings of other countries and using them for investment. The last great wave of savings flowing from the Developing Economies to the HICs (primarily the US) was in 1997 and 1998, through the Asian financial crisis. Since that time savings and investment have been almost identical.

The World Bank among others highlights the risk that talk of a recovery in the industrialised economies will combine with reduced money-creation (‘tapering’ by the US Federal Reserve) to place some of the Developing Economies in severe difficulties. Some Developing Economies have low savings levels and are highly dependent on inflows of foreign capital to finance overseas debts or trade deficits, or both. The risk is that savings flowing into New York, London and other financial centres from the high savings economies (mainly in Asia) will stay there and not be recycled to the Developing Economies that require them. Financial markets have already identified a hit-list of potential casualties.

The graphic below from the Financial Times highlights some of those economies. The currencies of Indonesia, South Africa and Turkey have all fallen by approximately 20% versus the US Dollar in the last year. Other countries on this list include Brazil, India, Chile, Hungary and Poland. 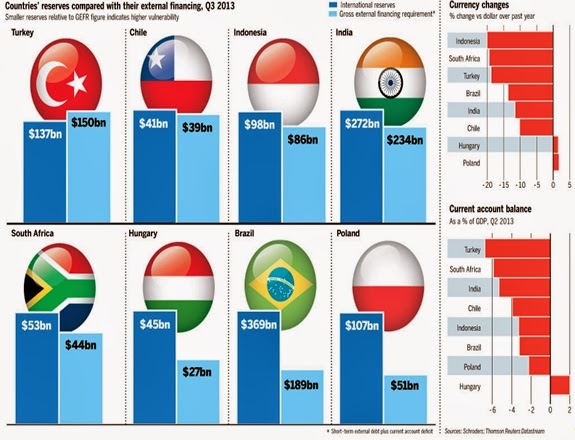 The financial market speculators and the FT may not be proved correct. Certainly some countries listed have ample foreign exchange reserves to meet external funding needs for quite some time. It is also possible that they could come to some bilateral arrangements with high-savings economies who might choose to invest directly in these economies. Of these high-savings economies China is the most important.

Even so it is noteworthy that chaos and dislocation has already begun in some Developing Economies because of developments in the indistrialised countries led by the US. The HICs have a feeble economic recovery that does not threaten to break out of the long-term downtrend. But the weakness of savings and investment in the industrialised economies is so marked that any upturn comes at the expense of growth and living standards in some Developing Economies.

The ‘turning-point’ that the World Bank speaks of is unlikely to be a return to robust growth in the industrialised economies. The greater risk is that it is actually a new round of turmoil for many of the Developing Economies.