This week George Osborne will announce his latest Budget. The specific measures in this Budget were not published at the time of writing. But it is a fairly safe assumption that he will boast that the economy is on track, and that there is a recovery. This is simply an exercise in redefinition.

The economy grew by just 1.9% in 2013. This is following a period of historically slow growth, the deepest recession in living memory and the weakest recovery on record. Yet many commentators and not just explicit supporters of austerity seem to believe this means we are automatically on track for a genuine recovery with all that means for growing jobs, rising real pay and improving living standards.

Unfortunately both the celebrations and the optimism are misplaced. Of course this does not mean that the economy will never grow again. It is even possible that growth will be a little better in 2014 than it was in 2013. But after most recessions the economic rebound is usually fairly strong. After a very steep recession the recovery should be very strong. That is not the case currently.

Annual growth in GDP of just 1.9% in 2013 is the best since 2007. But that is really a measure of the crisis of the economy and how badly policy has failed.

Prior to the current crisis, in the 20 years to 2008 the average annual growth rate of GDP was a little under 3%. In the same 20 year period from 1988 to 2008 only 3 years have seen worse growth for the British economy than last year’s 1.9% and all of those were associated with the recession under the Tories in the early 1990s (the ERM crisis).

Current growth rates also remain well below the previous trend. That means the gap between where we are and where could or should have been is actually getting wider. It would take many years of sustained growth above that 3% rate in order to close the gap between the actual level of GDP and its previous trend. No major forecasting body suggests anything like that is going to happen over the next few years. The chart below shows the trend growth of Britain’s GDP in from 1988 to 2008. 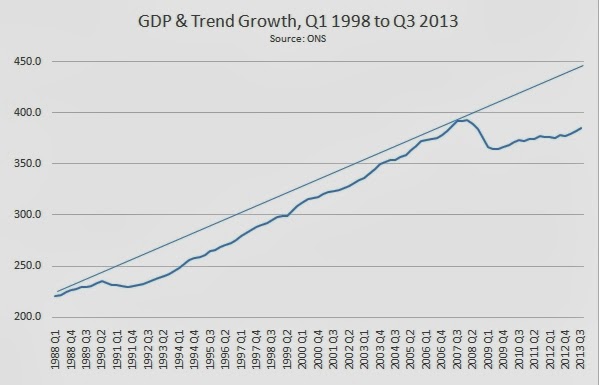 In all probability living standards for most people will not rise for several years and for many they will fall further unless growth accelerates significantly. Austerity policies have the effect of ensuring that the lion’s share of any recovery goes to a minority of the population.

Most Budget coverage is a deluge of minutiae about minor changes to the tax system. But the most important fact is this: talk of recovery is entirely misplaced. For the overwhelming majority of the population austerity policies mean that living standards will continue to decline.