.702ZLabour will inherit a crisis not a recoveryBy Michael Burke

For once it seems that the widespread reaction to a Budget was correct. Chancellors usually bury bad news in the detail of a Budget released long after their speech. However the dire electoral position of the Tories means that the main changes were announced with a flourish. The personal income tax rate threshold was raised to £10,500 a year, which the Institute for Public Policy Research has shown mainly benefits the highest earners. In addition, the annual amount of tax-free savings was boosted to £15,000 a year, which is actually close to the average (mean) disposable income in Britain. This was a Budget to shore up the Tory vote among higher earners and savers and staunch the defections to UKIP.

Osborne did nothing to address the economic crisis. This is not because the crisis is over or a self-sustaining recovery is underway. That is a dangerous delusion. Even the forecasts from Office for Budget Responsibility (OBR), which has proved to be significantly over-optimistic on growth since it was established, project only an annual average growth rate of approximately 2.5% over the next 5 years.

SEB has previously shown that a huge gap has accumulated between the current level of economic activity and the previous trend rate of growth. Even if 2.5% GDP growth materialises that gap will not close. At best it will not widen further. The poverty and misery arising from the current crisis will become embedded in the economy.

To arrive at its forecasts the OBR has made the following assumptions:-

Even under the OBR’s forecasts it is clear that all the benefits of projected growth are claimed by high earners, the rich and the owners of capital. Even if all these gains were spent by the rich (which is never the case) this would be insufficient to power the growth the OBR is projecting. The main contribution to growth envisaged by the OBR over the next period is a rise in household debt. This is shown in the chart below (Chart 3.33 in OBR data). 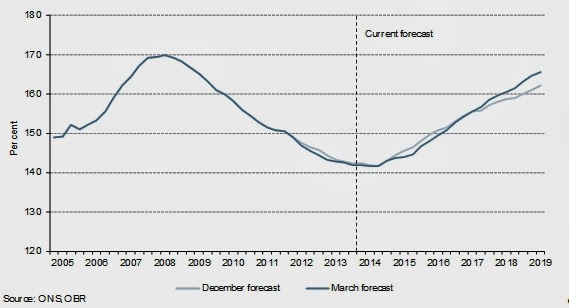 Reversing the post-crash trend, the OBR assumes that households will increase their debt on average from 142% of their incomes currently to 166% by 2019, close to levels preceding the crash. Under these officially-sanctioned forecasts most households will see no rise in incomes, only a rise in debt. They will be worse off in 5 years time than they are now.

It is not necessary to enumerate all the ways in which this forecast might be proven wrong, if for example there are increases in interest rates or inflation picks up because the currency falls, and so on. The key point to note is that for most people the crisis will be an enduring one, at least a decade long.

The crisis will continue because its root cause has not been addressed. Currently the fall in investment is approximately three times as large as the entire fall in GDP since the begnning of 2008. Investment has fallen by £58bn and GDP is still £21bn below its previous peak in the 1st quarter of 2008.

In fact, while GDP inches ahead in the longest-ever recession, investment (Gross Fixed Capital Formation) continues to decline. In addition, as the statisticians refine their understanding the most accurate position, the data for investment has mainly been revised lower. This is shown in the chart below (Chart in the OBR data). 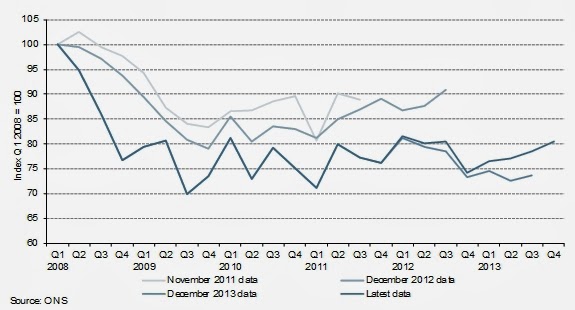 Total investment in Britain is one of the lowest of all the industrialised economies over a prolonged period (as shown in Fig.3 below, Chart G in OBR data). Business investment is currently equivalent to just 8% of GDP, also one of the lowest. Yet the OBR is effectively forecasting that the problem will disappear.

Fig.3 Total investment as % of GDP in industrialised countries 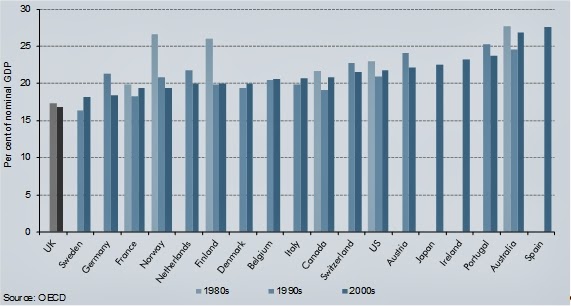 The OBR forecasts that business investment will rise by 50% in the course of the next 5 years- which has never happened in Britain outside of war. This means investment will be growing approximately 5 times as fast as the rest of the economy- even though, according to the OBR, there will be a tremendous profits squeeze, with profits falling from 33% of GDP in 2012 to 27% in 2018. These are outlandish forecasts. Only a policy to control and direct investment could produce such results.

Meanwhile, minimal wage growth, rising household debt and the investment slump are all related. It is impossible to create new, high-skilled high pay jobs without investment. The government can boast that one million jobs have been created in the last two years. But less than half of these have been for full-time employees and many of those are on zero hours or minimum wages. In order to finance any increase in spending at all, workers whose real wages are falling are obliged to drawn down savings or take on new debt.

This is the mess that the Tories will bequeath to Labour. Only a thorough break from the policies of austerity can solve it.