‘The Austerity Con’ is the title of a recent article in the London Review of Books. It is written by a leading Keynesian economist Professor Simon-Wren Lewis, who is also a fellow of Merton College, Oxford. The article is available to non-subscribers here. It deserves to be widely read because it contains two important arguments against austerity.

The first argument nails the lie that austerity was necessary because of an immediate crisis of government funding. The second argument exposes the myth that austerity has been responsible for an improvement in government finances. Both of these arguments will be familiar to regular readers of SEB and Prof. Wren-Lewis will give them a far wider airing. Given that averting the crisis in government finances is offered by the supporters of austerity as its main justification, the title of his piece is fully justified.

However there is a difference of view among opponents of austerity about the nature of the current crisis. It is important because it underpins both the overall analytical framework and the suggested policy prescriptions. Prof. Wren-Lewis says, “The place to begin is 2009. By then the full extent of the financial crisis had become apparent.” He goes on, “The financial crisis was leading consumers and firms to spend less and save more. That made sense for individuals, but the problem was that because everyone was doing it, the total amount of demand in the economy was falling. As demand fell, firms produced less, so they reduced their workforce.”

This is not entirely accurate. Demand is comprised of two components, consumption and investment. By taking a step back to 2007 it possible to see more clearly how the crisis arose. Regarding the industrialised countries as whole grouped in the OECD it is possible to see that only one of these experienced a sharp fall. This was investment not consumption.

Fig.1 below shows the level of real GDP and its key components, consumption, investment and net exports. The data is presented in both in constant prices in constant Purchasing Power Parity exchange rates and is itemised in the box below. 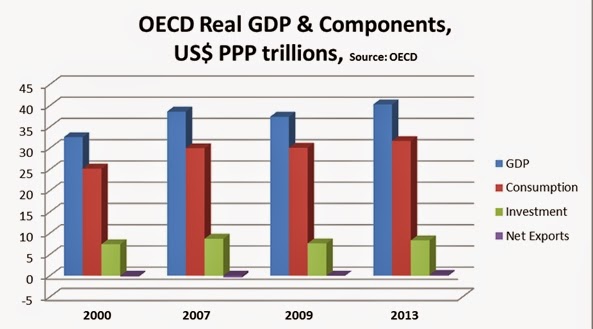 Source: OECD (data may not sum due to rounding and omissions)

By 2009 the OECD economies as a whole had experienced economic contraction compared to 2007 (the 2008 data is almost identical to 2007). But the direct contribution of falling consumption to the overall economic contraction was non-existent. It had even marginally increased.

The cause of the slump in 2009 was the decline in investment. In round terms GDP in the OECD fell by US$800billion in the two years to 2009 and investment (Gross Fixed Capital Formation) fell by US$1,100 billion. Over the same period, consumption rose fractionally.

It is the case that household consumption fell, just as Wren-Lewis says. But this was more than off-set by the simultaneous rise in government consumption. As he correctly states this was largely because of the operation of what are known in the jargon as ‘automatic stabilisers’. In economies where there exists significant provision of social security and other payments, these tend to rise automatically as unemployment increases along with in-work poverty and other aspects of social deprivation.

Yet taken together the effect of falling household consumption and rising government consumption was a small net increase in total consumption. More important than either a small net rise or fall, what is also clear is that a broadly steady level of consumption was not enough to prevent a sharp fall in investment, which was more than responsible for the entire slump across the OECD.

It is also the case that consumption in the OECD has recovered and now exceeds its pre-recession peak, but investment has not. This is not to say that ordinary households, workers and the poor have not suffered in the crisis. That is true in most countries and is at an extreme in a country such as Greece. But the decline in investment was both the cause of the economic crisis and is responsible for the weakness of the subsequent partial recovery in activity.

The fall in investment was not only responsible for the economic crisis. It was also directly responsible for the deterioration in government finances. Falling investment is a form of saving (unwillingness to spend on investment). As the private sector of the economy increased its savings the public sector was obliged to increase its borrowing which creates the deficits on public finances.

The crisis was not caused and is not perpetuated by a fall in both the components of demand. Only investment fell and it alone has failed to recover. Analysis needs to take account of this key factor, and the policy prescriptions which flow from it. Prof. Wren-Lewis is entirely correct to highlight the ‘Austerity Con’. The biggest con is that the crisis was caused by the public sector, when it was actually caused by the refusal of the private sector to invest. This cannot be addressed by government increasing consumption, or subsidies for consumption. It needs state-led investment.