US productivity declines
By Michael Burke

US productivity is set to decline for the first time in three decades, according to forecasts from the influential business research organisation the Conference Board. The level of productivity, which is the amount produced per hour of labour, is decisive for living standards. It is extremely difficult to increase the living standards of the mass of the population without increasing productivity, and impossible to do so on a sustained basis. The Conference Board is forecasting US productivity will decline in 2016.

Fig. 1 Conference Board changes in US productivity -via FT

But the chart also shows US productivity growth has been exceptionally weak in the recovery phase since the 2008 crisis. This weakness or outright falls in productivity is a generalised feature of the advanced industrialised economies since the crisis.

The cause is easily identified. Weak productivity growth is associated with weak investment growth. Outright falls in productivity have followed declines in investment. This is the pattern evident in the US economy. Fig.2 below shows Federal Reserve Board of St Louis data on the level of real investment (Gross Fixed Capital Formation) in the US economy, which is falling. 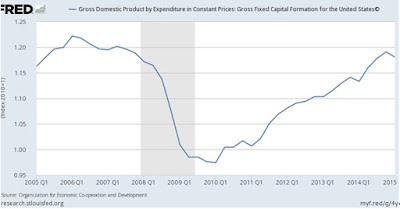 The level of productivity is expected to fall after the level of investment has already fallen. In effect, more workers will be attempting to produce goods and services with fewer machines to hand. As a result the level of that output per hour worked will decline. It is possible, for a period, to make the existing level of productive capacity work harder. But this simply accelerates the deterioration and dilapidation of that capital stock (its ‘wear and tear’) so the rate of consumption of capital exceeds the rate of investment. Net investment falls and with it the productive capacity of the economy as a whole.

Two further points are worth noting. First, the level of investment in the US economy never recovered its pre-recession peak and is now turning lower. The economic outlook is deteriorating as a result, not improving as the policy makers of the Federal Reserve Board seem to believe.

Turning to the UK economy, a cottage industry has grown up attempting to obscure the fundamental forces driving the decline in productivity here. SEB has shown that it is the decline in investment, leading to a decline in the net capital stock which has caused the crisis of productivity here, and that all other explanations are spurious. In the words of the FT report, the UK may simply be the ‘canary in the coalmine’, its productivity decline a harbinger of what may happen to the Western economies generally.