The debate is continuing on the purpose of government borrowing and the role of ‘balanced budgets’ – which was started by John McDonnell’s position of balancing the budget on current expenditure but borrowing for investment. This is not surprising given that economic policy has to be the core of the programme for a Labour government.

A thoughtful addition to the debate is this piece by Jo Michell in the Guardian, who asks for a real alternative to Osborne, which SEB has provided in relation to the Fiscal Responsibility Act. But an important misunderstanding should be clarified. That article argues that advocacy of a balanced current budget over the business cycle would be to ’emulate Ed Balls and austerity lite.’ That is incorrect. It would only be the case if the level of government investment were maintained at current miserably low levels. Instead what is proposed here is a transformational increase in public investment, sufficient to foster a sustained recovery led by public investment. Far from this being ‘austerity lite’ it makes state driven investment a key to economic policy – entirely unlike the policy of Ed Balls.

The piece below examines this attachment to persistent government budget deficits, which have been combined with a simultaneous long-run decline in public investment.

The position on Osborne’s proposals that a Labour government should balance the budget on current expenditure over the business cycle but borrow for investment is set out in an earlier article here. It follows from the fact that the purpose of economic policy is, or should be, to optimise the growth in the sustainable living standards of the population. Increasing living standards requires growth – internationally over 80% of increases in consumption are due to economic growth. Since it is not possible to increase the fundamental productive capacity of the economy without investment, investment is the decisive factor in producing growth (in an overall framework of increasing the division/socialisation of labour). Therefore economic policy, including fiscal policy, should aim at increasing investment and gradually enhancing the proportion of output devoted to investment. This is the precondition for more rapid growth – ‘growing the economy out of the crisis’ as John McDonnell and Jeremy Corbyn put it. Borrowing should primarily be confined to investment, only resorting to support consumption in specific exceptional circumstances – such as to maintain living standards of the least well off sections of the population during economic downturns. Social protection should be financed via taxation – levied in a disproportionate way on the richer sections of the population.

However, permanent or structural budget deficits have become a shibboleth for many ‘Keynesians’. This has almost nothing to do with Keynes, who himself responded to critics by arguing that the General Theory was primarily focused on the ‘regulation of the investment function’ (and barely mentioned budget deficits)*. Instead, the attachment to budget deficits is a product of the post-World War II economic consensus. In Britain this was known as Butskellism, the Tory/Labour bipartisan approach to policy which ended in spectacular economic failure by the early 1970s.

This consensus failed because it was based on a myth. The reality is that at the beginning of ‘Butskellism’ Britain and the US had experienced war-related booms. In four years of World War II the US economy doubled in real terms, and was to take another 22 years before it doubled again. In Britain the economy expanded by 55% in 10 years to 1943 and it was to take another 25 years before it increased by another 55%.

The false economic consensus was that the ‘post-WWII boom’, which some even dubbed the Golden Age of capitalism simply required expert ‘demand management’, where every sign of downturn was met with more government borrowing to finance day-to-day spending (and government-run industries were starved of investment). The true position is that this was the dwindling of the war boom, when government investment and direction of the dominant sectors of the economy had predominated. The attachment to persistent or structural budget deficits, on current expenditure and not for investment, arises from this post-WWII economic failure. The success was state-led and directed investment of the war and war preparation years.

It is a rather strange feature of the debate that many ‘Keynesians’ also regard themselves as scourges of the finance sector in general and its dominance in British society in particular. Yet as both Adam Smith and Karl Marx noted, the material power of the finance sector derives largely from its parasitic relationship to government. The interest which fattens the finance sector comes significantly in the first instance from the government, and the taxes it levies on the productive economy. As for Keynes, it is the opposite of his ‘euthanasia of the rentier’, to continually hand state assets to the finance sector. When, briefly, the Thatcher and Blair governments each had budget surpluses, there were howls of protest form the City about the ‘death of the gilts market’.

If there are deficits on current expenditure, including all the very valuable functions that can or should be performed by government, these should be met with progressive taxation. As the burden of taxation has shifted from big business and the rich to workers and the poor over time, it is clearly imperative that the former should bear the burden of increased taxation. In just one example, Thatcher inherited a Corporation Tax rate of 60% and Osborne will bequeath a rate of 18%. That trend should be reversed. To the argument that this undermines private sector investment, this has been in sharp decline even as taxes have been cut (Fig.1 below, which originally appeared on the PWC website).

Fig.1 Investment as a proportion of GDP 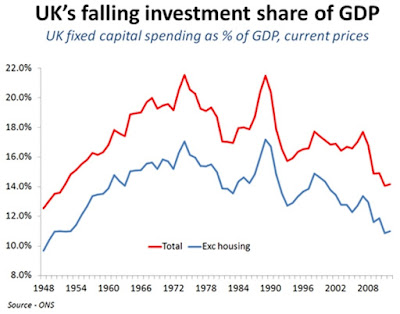 The British economy is participating in an investment crisis of the Western economies. It also has its own structural investment crisis, as the chart above shows. It is this twin problem that Corbynomics can address, and so raise living standards through growth led by investment – including the creation of a National Investment Bank.

There is strong opposition to this policy from capital. If the state increases its rate of investment, necessarily a greater proportion of the means of production will accumulate in state hands not those of the private sector. The entire Reagan/Thatcher era was designed to do the opposite and we are still living in that era. Attempting to accelerate the gradual run-down of the role of the state in the productive economy their programme was to attempt to remove it altogether – the policy Osborne is continuing.

But we should be clear the advocates of the ‘small state’ confine this to investment – because it means an interference in the means of production. They have had far less difficulty, and in many cases no difficulty, in increasing Government consumption as Fig.2 below shows. The Thatcherites were really primarily advocates of ‘small state investment’. 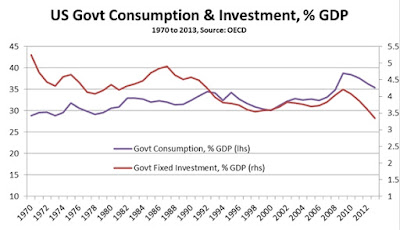 Osborne seems set on turning that into ‘no state investment’. But this curtailing of state investment is directly counterposed to the needs of the great majority of the population. This is why Labour, by setting out the goal of growth created by investment, including creation of an National Investment Bank, aligns its policy with that of the population. By taking the position of a balanced budget over the cycle on current expenditure but borrowing for investment John McDonnell has adopted the correct position in terms of economic theory and simultaneously, and for that reason, restores public credibility to Labour’s economic policy.

By setting out clearly that the there is an alternative to Tory policies, and that the opposite of austerity is investment, the Labour leadership team can demonstrate that its policies are superior and can deliver prosperity for the overwhelming majority.