Labour lost the last general election because it had no economic credibility, as the overwhelming bulk of opinion polls show. John McDonnell’s new ‘Fiscal Credibility Rule’ decisively and correctly addresses that issue.

“Labour would balance tax revenues and day-to-day spending over a five-year cycle, but this target would exclude long-term investment projects, allowing Labour to spend billions on projects such as housing, railways or high-speed broadband”, is how The Guardian summarised the new policy framework.

Despite an inevitably hostile Tory media McDonnell’s approach can succeed because it is correct. It stands in sharp contrast to George Osborne’s fiscal rules which place a ban on all borrowing for productive investment. This is Neanderthal economics which has the support of hardly any serious economist, even on the right. It also gets rid of the confusions of the ‘keynesian’ left of the Ed Balls type – which had little to do with the views of Keynes and fatally undermined Labour’s economic credibility.

All economic policies, including fiscal rules should be set within the basic laws of economics. Unfortunately after decades of the dominance of the Thatcherite economics which led to crisis, economic debate has been debased and a crop of crackpot ideas has grown up, Osborne’s among them.

A significant increase in production requires investment in the means of production. Prosperity cannot be raised by no investment, as Osborne suggests. For example his policy has been to encourage consumption without increasing investment in areas such as housing. The net result has been a growing housing shortage. In effect he raised demand for housing without increasing investment. The effect was higher prices, just as the textbooks say. Across the whole economy the effect has also been to increase indebtedness. Household debt has soared along with overseas debt. This would be the effect of all schemes which see consumption as the key to growth.

Therefore McDonnell’s Fiscal Credibility Rule is correct. Increasing investment, and in conditions where private investment is low Government borrowing to achieve it, is the only sustainable mechanism for increasing output and the prosperity that depends on it. At the same time current or day-to-day spending will be balanced over the medium-term cycle. This too is correct, as it allows Government to respond to any downturn in the economy by raising spending. But under ordinary circumstances current spending should be balanced by tax revenues.

Both of these policy planks have come under attack. It is widely argued that McDonnell’s rule is the same as Gordon Brown’s ‘Golden Rule’. Sometimes this is said as a result of a genuine misunderstanding. It also argued that the commitment to balance current spending with tax revenues means a commitment to maintain austerity. Both of these arguments are false.

The claim that John McDonnell is rehashing Ed Balls, made by commentators such as John Rentoul, is pure bullshit confirming that they do not understand basic economics, and the difference between investment and consumption. The difference between John McDonnell and Gordon Brown is that McDonnell is in favour of a massive increase in public sector investment. Brown slashed it to record lows. He only increased it later in response to the crisis. 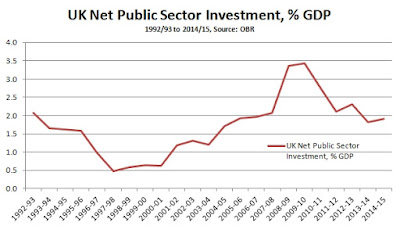 In the 1960s and early 1970s public sector net investment had frequently exceeded 6% of GDP. Thatcher cut that to a low-point of 0.7%. But Blair and Brown kept it at 0.6% of GDP for 3 years at the beginning of their time in office. Later, Brown did increase public sector investment in response to the crisis which was crucial to economic recovery. But that was after a crisis in which chronically low levels of investment and high levels of speculation played a decisive role.

Brown’s was an entirely wrong economic policy – the reverse of what is required. It is government current spending which should be allowed rise temporarily in response to crisis, while investment should be maintained at persistently high levels. This is what John McDonnell proposes, and Gordon Brown did the exact opposite.

The most effective way to increase tax revenues and to lower current spending is to grow the economy. SEB has previously referred to UK Treasury research which shows that government finances improve by 75 pence for every £1 increase in GDP. The excellent research is unjustly overlooked because it shows the very high sensitivity of government finances to changes in output.

By implication it also shows the fundamental relationship between government investment and the provision of public services and social protection that are the key to a decent society. If the output multipliers from a change in output are generally about 1.5 or more and the sensitivity of government finances is 0.75, it possible to calculate the immediate effect on government finances from every £1 increase in investment as follows:

Therefore there is an immediate positive return to government finances of 12.5% from every £1 invested. A 12.5% return is a very large multiple of current government borrowing costs as the yield on long-term gilts (UK government bonds) is around 1.5% (and the yield on inflation-proofed or index-linked gilts is negative).

If done on a sufficient scale, from this return it is possible to commit further investment, improve public sector services and improve government finances. The new investment asset (housing, super-fast broadband, renewable energy production and so on) will also yield a return over the long-term either directly or indirectly.

Therefore there should be no fear of scary headlines of the type that ‘McDonnell plans to borrow billions’. State investment is correct under current circumstances, and state investment is supported by the leading economic commentators such as Martin Wolf. It clearly correctly distinguishes Labour from the Tories and voters will increasingly grasp that such investment is crucial.

Borrowing for investment, not for consumption, is also key to rebalancing the economy. This means increasing the role and weight of the productive sectors of the economy and thereby producing a reduction in the role of speculative finance. It is logically impossible to persistently borrow for consumption and to reduce the weight of the finance sector in the British economy. As consumption does not lead to growth the only thing that will grow is government debt and the interest on it, which is the mainstay of speculative finance. This is why debt as a proportion of GDP has ballooned under Osborne from 65.2% of GDP to 83.7% of GDP even when interest rates are ultra-low.

It is evidently wrong to suggest that John McDonnell’s Fiscal Credibility Rule is either a rehash of Gordon Brown’s Golden Rule or a commitment to austerity. It is a recognition that investment leads growth while consumption cannot, and that very large government investment is required because of private sector failure. It codifies that understanding for government finances. As a result it can restore much-needed credibility to Labour’s economic policies.