The British economy continues to stagnate. Just over one year after the Tory-led Coalition announced its first Budget the British economy is virtually still in the water. In the preliminary estimate of GDP in the 2nd quarter growth was just 0.2%. In the three quarters since the Comprehensive Spending Review (CSR) this figure constitutes the sum total of economic growth, i.e. just 0.2% – with the previous 6 months having registered no growth at all.

Tory supporters are sufficiently concerned to have begun he discuss the need for a growth strategy, although the remedies offered are likely to exacerbate the situation, as will be discussed below.

As SEB has previously shown , before the Tory-led government’s policies began to take effect there had been an economic recovery. For comparison, in the three quarters preceding the CSR the economy had grown at a moderate rate of 2.1%. This is in sharp contrast to current performance which now reflects the effects of cuts to public spending and their wider impact on the economy.

In the three quarters since the CSR, the economy has expanded by just £660mn, compared to £26.7bn in the preceding 9 months. No wonder most households and businesses feel poorer and gloomier.

It is possible that the situation may get worse. Economies only respond to policy changes after a certain time lag. In both the phases of recovery and in the subsequent stagnation the economy as whole responded two quarters after significant changes in government spending. Although there was an ‘emergency budget’ in June 2010 and VAT was increased in January 2011, most of the cuts did not take place until the beginning of the Financial Year in April 2011. The depressing effect of those cuts is therefore only beginning to be felt and is likely to increase throughout the rest of this year.

Despite the fact that the recovery began at the end of 2009 GDP output is still 3.9% below its peak level. Other European economies such as Germany and Sweden have already recovered all the output lost in the recession, by taking precisely the opposite course. Growth was stimulated via a series of measures – most effectively by increased government spending. The consequence is their public sector deficits are falling, while in Britain the official forecasts for the deficit are being revised upwards. The reason for this is simply that tax revenues in Britain continue to disappoint as growth remains elusive.

In the Great Depression of the 1930s it took exactly 4 years for the previous level of output to be restored. The 2nd quarter of this year was the beginning of the 4th year since the recession. It seems extremely unlikely that the economy will grow by close to 4% by the 1st quarter of 2012. This depression will not be as severe as the Great Depression, but it seems likely to be even longer.

The stagnation of the economy and the damage this is doing to Tory popularity has sparked a debate about the need for growth. Predictably, it ignores that fact that the recovery was fostered by increased government spending, including investment and is being throttled by government spending cuts. Instead, the focus is on tax cuts for corporations and the rich, an end to all carbon reduction policies, a reduction in the minimum wage, abolishing employment laws, privatisation and so on.

This is a recipe for more of the same and, as in other countries, the effect of this huge transfer of incomes from poor to rich would be to depress economic activity even further as well increasing the public sector deficit.

Few of these ideas are likely to find much support outside Tory circles. But one which has is the idea of a corporate tax cut to boost investment. This call ignores two important facts. First, the government is already cutting corporate tax rates from 28% to 23%, yet the private sector’s investment strike continues and accounts for 80% of total lost output. Secondly, the non-financial corporate sector is already sitting on a cash mountain, which is simply financing dividend payments, enormous executive pay and takeovers- that is, everything but investment.

The call for lower corporate taxes obscures a central truth about the current crisis. In any normally functioning market economy the household sector is a net saver, that is it retains a portion of its income and does not consume it immediately. The savings are mainly held in banks. The corporate sector is a normally a net borrower for investment, and borrows from the banks. The government can either be a saver (budget surplus) or borrower (budget deficit). This depends on its own tax and spending policies, but also on what happens in the rest of the economy.

In the chart below, the level of lending or borrowing for these 3 main sectors is shown. Borrowing is a negative number and lending positive. Other important sectors (especially financial corporations and the rest of the world) have been disregarded for the sake of clarity. 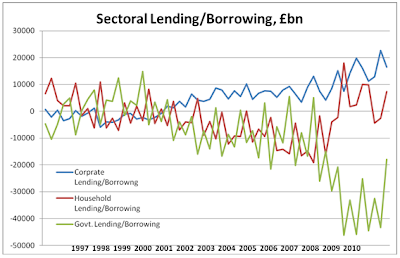 What the chart shows is the British non-financial corporate sector has not been performing its designated role over a prolonged period. It has been a net saver. Disregarding the sectors not shown, in general the sum of these three sectors must balance to zero. Saving by one sector must have another sector its borrowing counterpart.

The saving of the corporate sector had two effects. In the first instance corporate savings (achieved through lack of investment and low wages) obliged the household sector to become a net borrower to finance consumption. It also obliged the government to increase its borrowing as the lack of investment depressed taxation revenues. When, at the beginning of 1998, the household sector took fright and returned rapidly to its traditional role of net saver, the government was obliged to sharply increase its own borrowing and the public sector deficit ballooned.

A progressive government policy would be to encourage business investment by increasing the government’s own investment. If necessary, a radical government would simply seize these corporate savings and use them for investment purposes on its own account. But in no case should there be a reduction in the incomes of the household sector via wage cuts and public spending cuts. This only diminishes its ability either to spend or save, and does not create business investment.