By Michael Burke
Rachel Reeves, a former Labour shadow secretary for work and pensions, has produced a short note for Progress which has been hailed in the right wing media, and by the Labour right, as ‘an alternative Budget’. The New Statesman was perhaps the most excitable, describing Reeves as the shadow chancellor in waiting. All of this is entirely incorrect as the article offers no alternative to the Osborne’s resumed austerity, which he is certain to recommence in the next Budget.

Reeves has declined to join the current shadow cabinet under Jeremy Corbyn and her intervention is clearly posed primarily as an alternative to the economic policy framework outlined by Jeremy Corbyn and John McDonnell, not to George Osborne. It confirms once more that the Labour right is disloyally more interested in attacking the Labour Party leadership than in attacking the Tories.

In reality the note offers no recognition that there is now a weakening economic situation in Britain following an historically weak recovery. Consequently it offers no policy framework to improve matters. The very few policies outlined do not amount to a Budget, alternative or otherwise. There is no alternative to austerity, no clear role for government intervention, and certainly no suggestion that there is any mechanism to fund that intervention.

This amounts to a rehash of the economics of the Labour right, which wants nothing more than a cigarette paper between it and the Tories. It is the same as Ed Balls disastrous policy framework which played a key role in losing the last election. This approach also led most of the Parliamentary Labour Party under Harriet Harman to announce they would vote for the Tory cuts to working tax credits and only retreat to abstention under extreme pressure from unions and the Labour membership.

The real alternative
Osborne will argue that the UK economy is slowing, that this is because of deteriorating international conditions and that this therefore requires renewed austerity measures. Only the first of those statements is true.

The year-on-year growth rate has slowed in the UK from 3.0% in the 2nd quarter of 2014 to just 1.9% in the 4th quarter of 2015. Surveys, monthly data for early 2016 and other evidence all point to further slowing. Yet this is not induced by international conditions. Over the 18-month period real GDP has risen by a cumulative 3.3% but real exports have risen by 6.3% – indicating international demand is stronger than domestic demand. The slowdown in the British economy is not the result of international conditions (although these too are deteriorating). The slowdown is homemade. 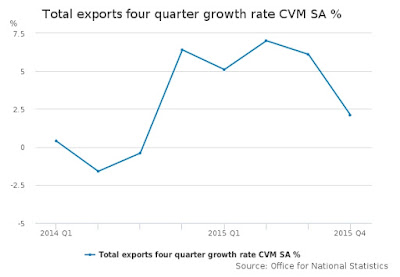 But Osborne’s argument that more austerity is required because there is a slowdown is as false as his other claims. It should be noted that Osborne’s austerity approach goes completely unchallenged in the so-called alternative budget. The effects of Osborne’s first bout of austerity should be well-known to readers of SEB:

· Growth slowed dramatically and stagnated in 2012

· Average living standards (per capita GDP) stagnated
· Real wages fell
· Public services are in crisis as jobs were cut
· The public sector deficit was not eliminated, and actually rose in 2012 as the economy slowed to a crawl
· Productivity actually fell, which had only previously occurred in the early years of World War I and in the Great Depression

In economic terms, renewed austerity is equivalent to applying leeches to the patient when the previous quack remedy has failed. As the effects of austerity fall mainly on ordinary workers and the poor, the social effects are enormously damaging.

It is clear that what is actually required is a strategy for investment-led growth. This will address the economic crisis directly and so will correct the deficit in government finances in the process. Fortunately, this is possible with the new economic framework outlined by Jeremy Corbyn and John McDonnell .

In contrast to the note from Rachel Reeves the new leadership of the Labour Party has identified the deficit of investment as central to the economic malaise facing Britain. In the US they talk of ‘secular stagnation’ or tepid growth because investment has only expanded by 10% in the years 2007 to 2014, according to World Bank data. In Britain investment has increased by just 7.8% in those 8 years. This little more than half the world rate of investment growth (14.2%) which is itself weak by historical standards.

The policy of asking and bribing the private sector to invest, a policy shared by Osborne and the Labour right, has failed spectacularly at Hinkley and elsewhere. Fewer homes are being built despite soaring prices, flood defences have been allowed to deteriorate and the rail network is truncated and overloaded, there is a looming energy capacity crisis while investment in renewable energy has been cut, and so on.

Labour’s new leadership argues that the public sector should increase its level of investment, in order to address this deficit and to spur growth. Relying on the private sector to lead has been tried and failed. In addition, unlike the hopes or pious wishes of both Osborne and Reeves, they have identified the means to achieve this increase in public sector investment, principally through the establishment of a National Investment Bank. This can borrow cheaply in the financial markets with the implicit guarantee of the UK Treasury. It can also ensure that the returns on the investment accrue to the public sector and that the investment stream is maintained even if private sector profitability is insufficient, or deteriorates.

It should be noted that this authentic version of a National investment bank has almost nothing in common with Osborne’s sop of a Green Investment Bank or Nick Trott’s version produced under Ed Miliband, which was aimed at providing loans to small firms where the commercial banks have refused. As small firms are not engaged in large scale housing programmes, or construction of rail networks, or the huge investment needed in renewables, this would be rather pointless to address an investment crisis.

The word ‘austerity’ does not appear in the alternative Budget from Rachel Reeves. This is for the very good reason that the Labour right believes it is inevitable, and has only ever argued for slower or shallower cuts at most.

By contrast Corbyn and McDonnell have outlined the economic policy framework which can end austerity by investing for growth. The clear distinction in borrowing only for investment and balancing current spending over the business cycle is the correct framework as it is the only one which is sustainable because it maximises the government impact on growth and living standards, and the returns to government from that investment.

It is also a strong base from which to attack Osborne, who rules out even borrowing for investment (although in reality he has doubled the level of government debt by borrowing to cover current spending, which is clearly unsustainable). Osborne’s policy, to save first and only invest when there are sufficient accumulated funds, belongs to a pre-banking, pre-financial era. It is as stupid as it is primitive.

The Corbyn/McDonnell framework also stands in sharp contrast to the accumulated confusions of ‘keynesians’ (who have little to do with the views of Keynes) who believe governments can perpetually borrow for consumption, rather than as a temporary measure to avert crisis. As this entails debt and interest on it without raising the level of output, so it becomes a drain on the economy and slows growth.

Osborne and Reeves share the view that the private sector should be left to determine the level of investment in the economy and consequently to maintain or extend its near-monopoly on the ownership of the means of production. They maintain this even when the private sector is manifestly failing to deliver adequate investment. Of course, the ‘keynesians’ are opposed to austerity and its effects (unlike Osborne and Reeves) but they lack a credible framework to achieve an alternative because they refuse to clearly distinguish between the economic consequences of borrowing for consumption and borrowing for investment.

Corbyn and McDonnell do have the framework to achieve that and a mechanism to do so. Not only are they committed to ending austerity but their plan to increase public sector investment via the National Investment Bank means the public sector can borrow sufficient funds for the scale of investment and direct it towards the sectors required.

The consequent increase in growth will allow them to halt all austerity policies and to roll them back. Government revenues will rise with increased economic activity and government outlays will fall as decent well-paid jobs are created. This is a deficit-reduction programme based not on cuts but on growth, and a commitment to both social welfare and rebuilding public services in the transition to a stronger growth economy and beyond. Because it is theoretically grounded, this is a genuine, practical anti-austerity policy.