The State of the Economy By Michael Burke

800 people packed into a recent ‘State of the Economy’ conference hosted by Shadow Chancellor John McDonnell to discuss economic trends and economic policy. This was in addition to the series of lectures that John McDonnell is hosting, with workshops at the conference allowing a more wide-ranging discussion and debate. In addition to important speeches by McDonnell himself and Jeremy Corbyn, there was a very valuable contribution from Ha Joon Chang, along the lines of his recent article in the Guardian.

SEB hopes to post videos and other material from the conference as they becomes available. Here is John McDonnell’s speech that opened the conference (video).

The piece below is based on a Powerpoint presentation at one of the workshops by the present author.

The UK economy remains in crisis, in contrast to the assertions of George Osborne and the supporters of austerity. The chart below compares the current slump to the Great Depression in this country and to the slump that followed the onslaught of Thatcherism (Fig.1). 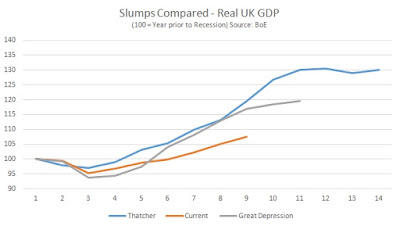 At the end of the 1st quarter in 2016 the current crisis was 8 years old, approaching a ‘lost decade’. As the chart shows the current crisis is much worse than either the Great Depression or under Thatcher. SEB previously suggested that this slump would be “twice as bad as Thatcher”, and this judgement has proved correct.

There is no suggestion that the course of this slump will necessarily follow the earlier periods. Major events or external factors intervened. The Great Depression ended with rearmament for World War II. The Thatcher experiment was boosted by the huge windfall from North Sea oil, although the Tories created another recession after the consumption splurge of the ‘Lawson Boom.’

There can be no crystal ball about the trajectory of the economy, but it is possible to identify the key internal dynamics which determine growth. This slump and its predecessors were all led by a crisis of investment. At the same time, it is impossible for an economy to grow sustainably over the medium-term if it has a low and/or falling level of investment. This characterises the current crisis in the economy (Fig.2).

Fig.2 Change in GDP and its components since the crisis began 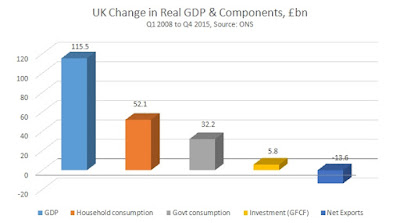 The economy overall remains close to stagnation, so that average living standards cannot rise. But the modest increase in GDP since the crisis is almost entirely driven by rising consumption. The combined increase in household and government consumption amounts to £84.3bn. But the rise in investment is just £5.8bn. Since the crisis the proportion of investment has amounted to just 5% of GDP. As this is below the rate of capital consumption (capital used up in production, or which dilapidates), the stock of capital in the British economy is falling. As a result the capacity for future increases in output is declining. At the same time, an inevitable consequence of growth which relies almost entirely on consumption while net investment falls is a rising trade deficit. The trade gap has widened once more to record levels even during a period of stagnation. 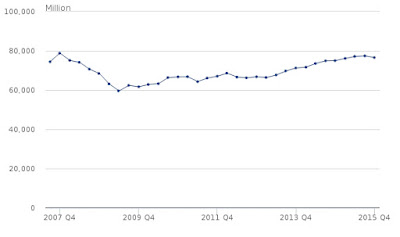 Source: ONS
Over time, Britain and the other advanced industrialised economies have increasingly adopted the US model of economic growth, particularly from the 1980s onwards (Fig.4). This is a model based on rising consumption as a proportion of GDP and consequently a declining proportion of GDP directed towards investment.

By contrast economies with a high and/or rising proportion of GDP directed to investment will produce higher rates of GDP growth and consumption can grow more rapidly. But this is not the US or Western model.

Fig.4 US Consumption share in GDP and consumption growth 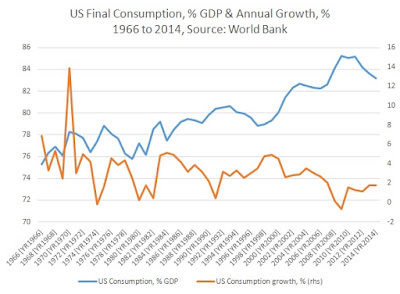 The US-led Western model of growth can be summarised as ‘shop till you drop’ and consumers frequently do. Slow growth economies produce flat or falling real incomes and consumption is

increasingly financed by debt, until the point at which the debt becomes unsustainable. 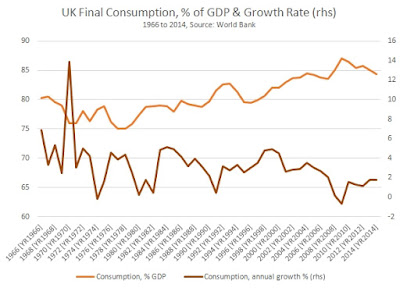 This fundamental economic context demonstrates why the fiscal framework set out by John McDonnell is correct. The commitment to borrow only for investment provides the optimal basis for sustainably higher rates of growth. The claims that this is austerity-lite or similar to failed Labour policies of the past are misplaced or disingenuous.

The crucial difference lies less in the specific fiscal rules than in the economic context. The entire theme of the State of the Economy conference was the need to substantially increase investment. Previous governments cut investment and adopted Tory spending plans. In those circumstances, it is only possible to balance the current spending budget by applying a brake to it. The level of government spending as a proportion of GDP was on average lower in the New Labour years than under Thatcher.

By contrast, if investment is increased the economy will grow more rapidly and consequently tax revenues will grow more rapidly. It is also likely that social welfare payments will fall as more people are in better-paid work. Both of these revenue and expenditure headings are in the Government current spending account. Increased investment will cut the current spending deficit.

The scale of problem requires this break from past economic orthodoxy in Britain. The depth of the crisis means that traditional ‘demand management’ and muddling through will not work. It may even be that ‘People’s Quantitative Easing’, that is money creation for investment purposes, is necessary.

The general rule is that the greater the increase in investment the faster the economy can sustainably grow and the more rapidly the deficit on current spending will decline, which is the basis for Labour’s economic plans. There is no sign that anything else is likely to rescue the British economy.