In what is probably a desperate attempt to stay politically relevant Chancellor George Osborne has announced a ‘5-point plan’ the centre-piece of which is an undated intention to cut the Corporation Tax rate to 15%. This is justified in terms of attracting investment to off-set the shock of the Brexit referendum outcome. It will do nothing of the sort. The effect will be to reduce further the funds available for public sector investment. As this deepens the investment crisis of the UK economy Osborne’s claim that this cut signifies that ‘Britain is open for business’ is false. Instead it indicates ‘welcome to a low tax, low investment Slumsville’.

SEB has previously shown that repeated cuts to the level of Corporate Tax (on profits) have not led to an increase investment at all. This is illustrated in Fig.1 below which shows the level of the CT rate and business investment as a proportion of GDP. 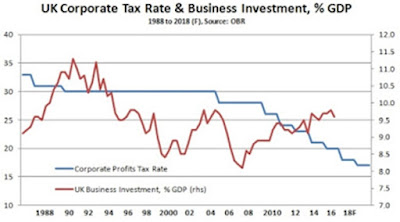 This should not be surprising. Business investment is driven by returns or profits. If Company X makes profits of £1 million and pays a 30% CT rate then the net profits will be £700,000 and it may be attractive to invest further. But if the same Company X makes profits of £500,000 and pays just a 20% CT rate of its net profits are just £400,000. This may be too low to attract investment.

But the effect of the CT rate cut is worse than neutral. The UK Treasury works with the assumption that each 1% cut in the CT rate reduced Government revenues by £2 billion. Table 1 below shows the level of CT revenues by year. 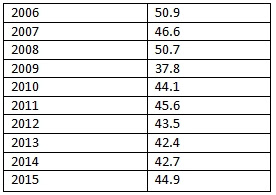 Just as lower tax rates have failed to lead to any improvement in the level of business investment, restoring the CT rate would not lead to a slump in investment. If the CT rate had been maintained at 30% the revenues on the level of profits recorded in 2015 would have been £67.3 billion, or £22.4 billion more than actually recorded. A 10% cut in the CT rate led a £22.4 billion decline in revenues, slightly worse than but overall in line with the Treasury model.

With these additional Government revenues it would have been possible to fund very extensive public sector investment programmes. These would generate high-skilled and highly-paid jobs, boosting the level of economic activity and productivity. The projects themselves could be taken from the Government’s own National Infrastructure Plan, about which there has been so much publicity and so little activity. Previous experience shows that those parts of the private sector benefiting from increased public sector investment respond with increased investment of their own. This is the road that the Government should now go down in response to the crisis, providing a public sector-led investment response to the crisis.

But the Tories strive at every turn to reduce the role of the state, even as the banks, the housing association sector and now possibly the social care sector falls into state hands as the private sector atrophies under the crisis. Unfortunately, the Labour right in the person of Alistair Darling signed up to the Osborne fantasy ‘Emergency Budget’, which even Osborne is not so reckless to implement. This signifies complete inability to learn anything from the economic crisis of the last 9 years.

The only significant political force which understands the need for increased public sector investment in response to the crisis is the Labour leadership under Jeremy Corbyn and John McDonnell. Yet they are under attack, it seems, not despite their correct understanding of the solution to the crisis, but because of it.