‘No harm from Brexit vote’ is fantasy island politicsBy Tom O’Leary
There is a concerted propaganda effort claiming that there has been no damage to the economy arising from the Brexit vote. This is being mounted not just by newspapers who supported Leave, such as the Daily Telegraph but it also includes sections of the left, the minority who also supported leaving the EU such as Larry Elliott in the Guardian.

The reality is that living standards have already fallen as a result of the Brexit vote, before the negotiations attempting to achieve it have even begun. The international purchasing power of the UK economy fell immediately as the pound depreciated sharply again in the early hours of June 24 although it had already fallen in the run-up to the referendum. The Sterling Trade-Weighted Index, the Bank of England’s measure of the value of the currency adjusted for the UK’s trade patterns has fallen by over 20% since July 2015. It stood at 78.0248 on August 18, which is also 12.5% below its level on June 23.
This falling in purchasing power is first most obviously reflected in higher prices. This has all happened before. The pound fell by 44% in the year to December 2008 that year. Consumer price inflation rose sharply subsequently, peaking at 5.2% year-on-year price rises in September 2011. Alone of the all the crisis-hit countries in Europe the UK economy experienced inflation even during a slump. This was a key contributor the fall in real wages that the TUC has noted. UK real wages fell by 10.5% from 2007 to 2015, a fall equalled only by Greece. A smaller, less pronounced rise in prices should now be expected in the period ahead, with a similarly more modest fall in real wages.

Source: TUC
As previously, the rise in prices will take some time to work through the economy. This is because many goods and services that are imported are subject to fixed price contracts, which take time to be replaced. The rising oil price also feeds into the cost base of virtually all producers of goods, but does so with a time lag. Recently the oil price in sterling terms has risen from about £20bbl to £30bbl, a rise of 50%.

Brexit supporters argue that the lower level of the currency will make UK exports cheaper on international markets, as well as making imports more expensive. This is true. But a sustained increase in UK exports would also require that exporters increase their level of investment. Otherwise the potential boost to exports is squandered. Yet this is the long-run history of the UK economy, repeated currency crises and devaluations, and declining share of world export markets. More recently, the export performance of the UK economy following the 44% devaluation brought about by the crisis led to no significant export recovery. On the contrary, the UK external deficits are at record levels.

The missing factor is business investment. Previously, SEB has argued that it would be investment that would react most rapidly and most negatively to the Brexit vote. This is because the profitability of firms is in part driven by the size of the market in which they operate, and the Brexit vote threatens to cut the UK economy off from the largest market in the world. So far, as with almost all economic data, only survey data for investment has been published for the period immediately after the vote. The actual effects of the vote will be felt over a much longer timescale. The Markit PMI survey shows the fall in demand for investment goods alongside demand for other goods. The Bank of England’s regional agents’ survey covers firms with 1.2 million workers and shows that half of them plan to cut recruitment following the vote. 60% plan to cut investment, and none plan to increase investment following the vote. 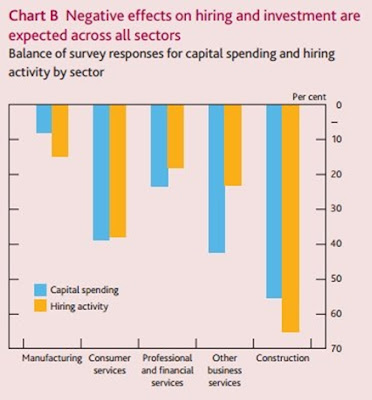 Of course, for those who insist against all evidence that consumption can lead growth, then the strong rise in retail sales in July are a harbinger of a rosy outlook for the UK economy. Shoppers will lead the way. No matter that real incomes are set to fall once more and that therefore rising consumption could only be sustained by falling household savings and rising household debt. At some point, these come to an abrupt halt.

This is part of the fantasy island economics and politics which led to the Brexit referendum and the vote itself. It will not be borne out by events.