John McDonnell’s fiscal policy framework continues to come under fire from both left and right. The framework broadly states that the Government should borrow for investment (the capital account) and that over the business cycle Government day-to-day spending (the Government’s current account) should be in balance.

The attacks from the right are largely disingenuous. They argue that the McDonnell framework is little different from that of Ed Balls, a cloak for austerity-lite. The Balls approach also included a commitment to match Tory spending plans in the first two years. These would have been the deepest cuts to public spending in history and were so draconian that the Tories themselves abandoned them in office after May 2015. Balls supplemented this with a ‘zero-based spending review’, that is a commitment to have no commitments, not even to pensions, to social welfare for disabled people, or to the NHS.

The contrast with John McDonnell is a sharp one. He has consistently opposed austerity. Crucially, McDonnell he has committed to the establishment of a National Investment Bank to address the acute investment shortage of the UK economy. He has also committed to borrowing £500 billion for investment to tackle the crisis. The McDonnell framework is not different to Balls because it can be suspended. Its content and its effects would be entirely different.

Unfortunately, because of a deep misunderstanding of economics, economic history and public finances, many progressive or ‘keynesian’ economists echo these same rightist criticisms. As this is primarily misunderstanding not malevolence, it is worth addressing once again.

From a theoretical perspective the misunderstanding arises because of the widespread view that Consumption can lead growth. Therefore, it is argued, the Government should increase its own Consumption in order to foster recovery. The premise is false.

Yet ‘keynesians’ and other progressives who wish to end austerity persist in arguing for Government to increase Consumption by borrowing on its own account- hence the attacks on McDonnell. This is also flies in the face of economic history.

It is widely recognised the economic growth rate of the UK and of many of the Western economies was greater in the post-World War II period, from 1945 to the early 1970s than in the subsequent period. This recognition includes ‘keynesians’ and many others, some describing it as the ‘Golden Age’.

This itself is a misreading as the far higher growth rate in the US and to a lesser extent the UK was in the pre-war and war period itself. The exceptionally strong growth was caused by the state taking control of investment and directing very large increases, in order to wage war. The subsequent ‘Golden Age’ was the gradual deceleration of this war boom.

Even so, the recognition that growth in the post-War period was markedly stronger than the period beginning in the early 1970s is shared. It is factually correct. Yet this ‘Golden Age’ does not at all conform to the ‘keynesian’ prescription for permanent public sector deficits on the current Budget. In fact it shows the opposite.

Fig.1 UK Current Budget Deficit as a Proportion of GDP 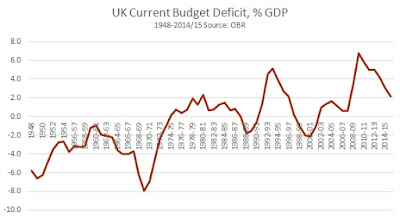 The smallest surplus on the current Budget in the entire period was equivalent to 0.9% of GDP in 1960/61. The largest surplus was equal to 7.9% of GDP in 1969/70. The current Budget did not move into deficit until 1974/75, precisely when the ‘Golden Age’ of stronger growth was ending. Apart from brief periods, there have been large and growing deficits ever since and the trend in GDP growth has slowed at the same time.

This post-WWII period of large current Budget surpluses coincided with the establishment of the NHS, the creation of the ‘welfare state’, a massive public sector house building programme, large scale nationalisations and other measures.

How is this possible? How can there both be (sometimes huge) surpluses on the current Budget while Government current spending was initiating a whole series of new or improved public goods?

The answer is investment, public investment. Fig.2 below shows the level of Public Sector Net Investment as a proportion of GDP over the same period. 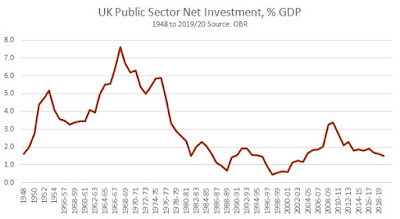 The high points in net public sector investment coincide with the very large surpluses on the public sector current account (or in reality precede those surpluses by 18 months to two years). This demonstrates a fundamental law of public finances. The returns to the public sector from investment are not registered in the investment account but are overwhelmingly returned to the public sector current account.
When governments build a rail network, a university science park, superfast broadband, or when a local authority builds a home, the investment return is not more rail networks or homes than those built. It is registered as increased tax revenues and, via job creation, as lower social security outlays such as on unemployment, payments for poverty such as tax credits, and so on. The investment comes back mainly as tax revenues, which is part of the current account balance. The UK Treasury estimates that every £1 rise in output is recorded as a 70p improvement in government finances, 50p of which is higher tax revenues. Those revenues can either be used either for more investment, or to increase current spending or some combination of the two.

This explains why both rightist and leftist criticisms are misplaced. The McDonnell framework will not lead to austerity if investment is increased. More importantly, it offers a way out of the crisis. If investment is sufficiently strong the economic recovery will provide sufficient tax revenues and lower social security outlays to become self-sustaining. This improvement in government finances can be used for more investment and for increased current spending.

On the other hand, if it should be the case that recovery remains weak and therefore the current budget remains in deficit, then the answer would not be to cut current spending, but to increase public sector investment.

The period of the greatest advances in public sector current spending took place when there were surpluses on this current account, only made possible by relatively high levels of public investment, in British terms at least. Current spending has been in crisis ever since 1974, with Denis Healey’s fake IMF crisis, then Thatcher and her successors, who slashed public investment.

Mainstream economics largely tries to bury economic history. Those genuinely seeking an alternative to austerity should not make the same mistake.