The recent controversy over economic policy in Portugal is very important as it holds extremely valuable lessons for the entire anti-austerity left in Europe as a whole. The left in Portugal has achieved something unique in the current period, operating in government to end austerity. In the broadest sense this is the prospectus for a Corbyn government. It should be for the entire left in Europe. Therefore the entire experience bears close scrutiny.

Owen Jones began the controversy with a simple statement of fact, that the Portuguese experience shows that austerity was not necessary. Policies supporting growth were far preferable, and among other things also led to a reduction in the public sector deficit.    Jones has come under attack from a number of quarters. Jolyon Maugham, a widely followed commentator on twitter led the charge, with a series of tweets in a complete defence of the EU’s actions. 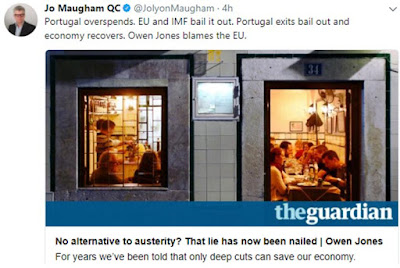 The tweet is a model of brevity, containing at least three errors in less than 140 characters. Most importantly, it was not ‘Portugal’ which was bailed out but its creditors. The government still bears those debts from that period, and these were made worse by the austerity programme that accompanied it. The EU Commission is one of the culprits, along with the IMF, the ECB, local politicians (including those from the Socialist Party which is now leading the current left coalition), as well as the ratings’ agencies, the domestic and international banks and of course the creditors. Like the LibDems, in defending EU membership Maugham goes further and defends EU austerity.

The Portuguese recovery comes despite the imposition of the austerity programme imposed, not because of it. But the most important questions for the left now are how can recovery be achieved, and how can it be sustained.

The IMF is forecasting 2.1% real GDP growth in 2017, which would be the strongest rate of growth since the crisis began in 2008. But the growth rate has been 2.8% in the first half of 2017 compared to the same period in 2016, exceeding the EU or the Euro Area average. There is no doubt that growth is accelerating and has done so since the coalition of the social democrats and far left parties came to office. 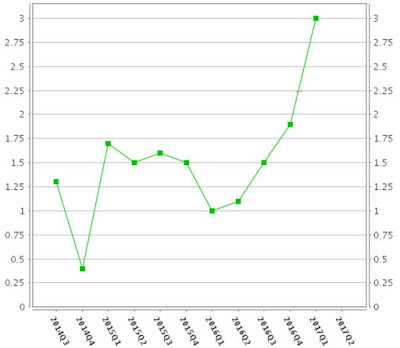 The first conclusion must be that ending austerity does not lead to disaster. Instead it has led to accelerating growth (and lower public sector deficits). The second conclusion is that it is possible for a left government to end austerity while in the EU and even the Euro Area, at least within certain limits.

The limits on growth are set by the accumulation of capital, the growth in the means of production. Since the left coalition came to office the level of Investment (Gross Fixed Capital Formation) has risen by 7.7% (data for the 2nd quarter of 2017 is not yet available). Over the same period real GDP has grown at less than half that pace. Investment has led growth.

The government has contributed to this rise in Investment, but the bigger contribution has come from the private sector. As anticipated profits are the driver of private investment it is likely that government measures to boost Consumption, combined with its own modest increase in Investment have had the effect of boosting the anticipated level of profits. In short, stimulus measures have kick-started the economy.

This run-down in household savings is unsustainable. Even current levels of Consumption, which have encouraged increased private sector Investment cannot be sustained. Real wages have been falling. At a certain point, without real growth in incomes and wages households will take fright and rein in their spending.

In order to sustain the recovery as a whole and to lift real wages, Investment growth must be sustainably increased. This is unlikely to come from the private sector if consumer spending flags. Therefore government will have to find ways in which it can increase public sector Investment.

Without much more detailed knowledge of the Portuguese economy, it is impossible to provide a blueprint for a public sector-led investment programme. But there are a number of potential sources of funds. These include but are not exhausted by the following:

The scale of the Investment needed is very high. In 2000 GFCF as a proportion of GDP reached 28% and is effectively half that currently. But every significant step in that direction puts the recovery on a more sustainable basis.