Austerity is on course to be a lot worseBy Michael Burke

The Office for Budget Responsibility (OBR) has produced its latest assessment of the economic crisis and its impact on government finances (pdf here). In common with the UK Treasury the OBR tends to underestimate the impact of austerity policies and consequently has a persistently over-optimistic outlook for the British economy. This is no surprise as the OBR uses the Treasury economic model.
Even so the detailed analysis by the OBR is very valuable as it reflects official thinking on the economy and on economic policy. This view will continue to be shared by the OBR and Treasury beyond the next election.

A key conclusion of the latest report is the assessment that austerity policies are set to continue for some time to come. The chart below shows the OBR’s assessment of the austerity policies and their composition from 2008/09 with projections until 2018/19. The policy measures of government spending cuts and tax change changes are expressed as a percentage of GDP. 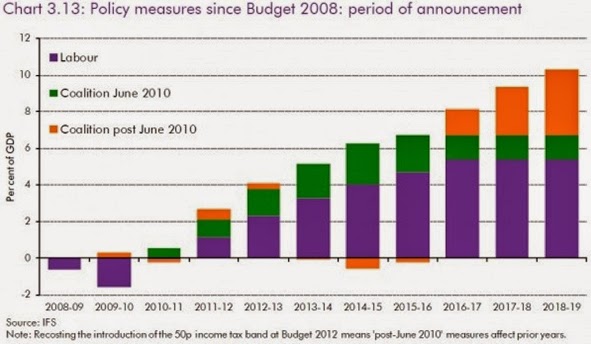 The OBR persists in projecting the effects of Labour policy over the entire period even though the Coalition has been in office since May 2010. Labour’s austerity measures (announced by Alistair Darling in March 2010) are shown in purple. The additional measures introduced by the Coalition in June 2010 are shown in green. The further measures after that time (beginning with the Austumn Statement in 2010 and March 2011 Budget) are shown in orange.

At the TUC, Geoff Tily points out that that the entire OBR analysis is based on an incorrect framework (adopted from the Treasury). This framework assumes that austerity reduces the deficit while doing little damage to the economy. Yet the OBR’s own data show this assumption is incorrect.

The data below is extracted from the OBR’s Chart 1.3 in its latest report. It shows the level of Total Managed Expenditure versus Current Receipts as a proportion of GDP during the entire period of the crisis to date. 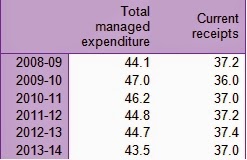 Since FY 2008/09 expenditure has fallen by just 0.6% while receipts have also fallen by 0.2% of GDP. The OBR forecasts that this will improve imminently, but forecasts of that type have been made ever since the OBR was established. The latest data for the current Financial Year actually show the deficit widening once more. The effect of austerity policies is to produce the weakest recovery on record while the reduction in the deficit has been minuscule. If 5% or more fiscal tightening has been required to reduce the deficit by just 0.4%, the OBR projections of further policy measures shown in Fig. 1 are likely to be a significant underestimate.

A continuation of austerity policies is unlikely to produce a different outcome. Unless there is a radical break with OBR/Treasury thinking, austerity is set to get a lot worse.