The British economy expanded at its fastest rate since the recession ended, up 1.1% in Q2 according to preliminary data. These data are often subject to substantial revisions, but the hope must be that, having been held over and scrutinised for 2 weeks, they are an accurate reflection of the pick-up in activity.

The latest growth rate represents a significant acceleration over the prior two quarters when the cumulative expansion was just 0.7%. But the pace of the recovery is almost exactly in line with the recoveries from both the 1980 and 1992 recessions, which were much milder and shorter than the recent slump. In both the 1980s and 1990s recessions the previous peak in activity was recovered after 3 years. At this similar pace it will take close to 5 years to recover the previous peak in activity.

There are two key factors which supported the modest rebound in activity- the depreciation of the pound and the 2009 Budget.

The fall in the pound has been precipitate. As the chart below shows, prior to the recession Sterling was valued at over 2 US Dollars, and fell by over 26% in 2008 and to a low of US/£$1.37 early in 2009. This depreciation and the recovery in global trade prompted a very modest pick-up in exports. In the Q1 GDP data (the preliminary Q2 do not provide a breakdown of the national accounts) exports are 2.9% above their recession low in Q2 2008.

These positive effects of increased government spending and a weaker currency are already beginning to wear off and the impulse being reversed. As the chart above shows, the currency has already appreciated by over 10% from its January 2009 low against the US Dollar, and Sterling has also been appreciating against the Euro, the currency of Britain’s main export markets.

It is also widely known that this expansionary fiscal policy is shifting into reverse, with significant cuts enacted and vastly more in the pipeline.

The forward-looking indicators of the economy are already warning of a slowdown, before those cuts bite. Recent surveys of both manufacturing and construction growth have both shown a levelling off in activity. But surveys of the service sector, which accounts for three-quarters of the economy, have seen a marked deceleration with the June reading the lowest for 10 months . As the Bloomberg news service puts it, ‘U.K. services growth slowed more than economists forecast in June after the government’s austerity measures to cut the budget deficit sapped confidence’. Both house prices and consumer confidence recently recorded their first falls in over a year.

Previous optimism that a pronounced slump would lead to a sharp recovery has given way to a more sober assessment. These are strong grounds for the view that the growth rate is already peaking and a slowdown likely later in the year. With the extraordinarily deep cuts planned by the ConDem coalition, a double-dip recession or a severe slowdown in recovery is a real threat.

It is evidently the case that a further increase in government spending would benefit the economy. It might even lead to a renewed decline in the currency, as the combination of relatively loose monetary policy and fiscal policy is held to be a prescription for currency depreciation.

But the argument of the government and its supporters is that there is simply no room to increase government spending. Drawing comfort from Liam Byrne’s crassly ignorant phrase, they argue that ‘there’s no money left’.

On that logic, of course, however desirable increased government investment might be to support the economy, it is not sustainable. Government finances would go to hell, with huge deficits, loss of credit rating, IMF missions, and so on.

All of which seems very compelling – except that it is factually incorrect. As SEB has previously noted, the 2009 Budget was moderately stimulative and that worked. Growth was higher than anticipated and the deficit narrowed as a result.

The latest trends in public finances confirm that point and amplify it, as well as providing a warning about the impact of cuts. In the December Pre-Budget Report Alistair Darling forecast a public sector borrowing requirement (PSBR) of £178bn in the current financial year. In his March Budget this year, that projection had fallen to £167bn. The Office for Budget Responsibility lowered it to £156bn and Osborne’s June Budget shaved it to £155bn. Yet they are all still playing catch-up to the trend improvement in government finances.

In the chart below we show the 12-month rolling total for the PSBR, which has consistently undershot official forecasts and has been falling outright since February this year, when it peaked at £144.4bn. In June it had declined to £143.1bn. 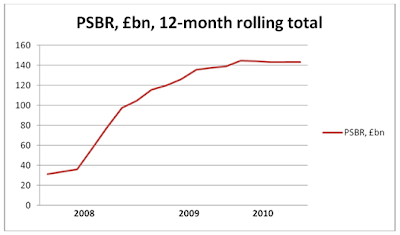 The reason for the undershoot in the deficit is that tax receipts are much higher than anticipated, up £8.3bn in the latest 3 months alone. In the latest 12 months, that is in the period after the 2009 Budget, total government spending is £36.8bn higher than in the prior 12 months. Of that, £3.4bn is increased interest payments, and therefore £32.4bn is the actual increase in government outlays on goods, services and investment. This boosted economic activity, and the taxes that derive from it. Taxes on production are £18bn higher in the latest 12 months than in the prior period. In addition, the rise in unemployment has only been a proportion of what was expected. This feeds into lower-than-anticipated welfare payments.

That ignorance stretches into the labour movement. Ex-Chancellor Alistair Darling quite rightly ascribes the improvement in the economy to Labour government’s actions. But these were from the investment and increased spending of the 2009 Budget not his 2010 cuts Budget where he threatened to be ‘worse than Thatcher’. Further, the connection between this rebound in GDP and the improvement in government finances seems to have escaped him entirely.

By contrast, Brendan Barber says, ‘The impressive GDP figures are the result of fiscal stimulus and active policymaking. But continued growth cannot be taken for granted, and there is now a huge risk that cuts in spending will bring the recovery to a shuddering halt. Deficit fetishism still risks a return to a flat line economy’.

The TUC general secretary is quite right. Not only is the policy of cuts to public spending sure to weaken growth, but it threatens, as a result, to lead to renewed widening of the deficit.