Unemployment has risen by 44,000 in the latest 3-month period to December and employment has fallen by 68,000. These represent a renewed phase in the recent deterioration in employment, which had been on a very moderate improving trend.

The jobless total rose substantially during the recession. According to the Office for National Statistics (ONS), total employment fell by 600,000 during the six quarters of recession , and continued to fall during the recovery (although ONS does not take into account net job losses in the run-up to the recession) . The unemployment total also continued to rise through the recession and did not peak until it reached 2.506 million in February 2010. Between February and August last year unemployment fell to 2.448 million, a small improvement of 58,000 reflecting the modest recovery that had begun in Q4 2009. However, unemployment has contracted once more and unemployment has since risen back to 2.492 million in the latest data. The recent trends in unemployment are shown in Chart 1 below. 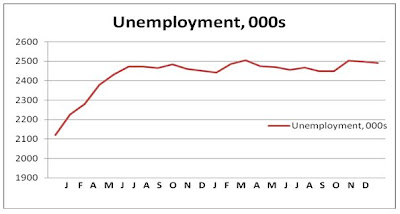 In the current recession employment continued to fall until February 2010 so that the total decline in jobs was 763,000 as a result of the recession – 600,000 lost while GDP contracted to September 2009 and another 163,000 in subsequent months. In the two previous recessions under Thatcher and Major, the slump in jobs was much greater even though the fall in output was not nearly so great.

In the table below we show the impact on jobs arising from the last 3 recessions.

Table 1. Impact of Recessions on Changes in Employment

The first point to note is that the total loss of jobs in this slump is much lower than under the two Tory governments – despite the loss in output being almost equivalent to the prior two recessions combined. Second, the change in employment post-recession has been unusually positive in the current period.

Changes in employment and unemployment tend to lag behind changes in output as firms do not immediately begin firing when output falls, and are slow to rehire when it begins to rise. The improvement in employment was in response to the improvement in the economy from the end of 2009 onwards and the assumption that it would continue limiting the destruction of jobs. Third, the renewed downturn in employment represents a break in that trend. In effect, the impact of policy is being brought into line with the previous recessions under Tory governments.

The policy difference in the different recessions is marked. The decline in employment in the latest recession was more muted than in the two preceding recessions. In addition, the resumption of net job creation was much earlier than in the two preceding recessions. The net job losses arising from the recession were therefore much lower, less than 400,000 compared to over 1.6 million in both prior cases. While the misery and waste caused by those 400,000 net job losses could have been avoided with a much bolder policy, there is a qualitative difference in outcomes for jobs between the policies adopted in the latest recession and those adopted by the two previous Tory governments.

The crucial difference lies in policy, and its aims. In both the 1980s and 1990s, under different guises of ‘monetarism’ and ‘bearing down on inflation’, Tory governments actively pursued a policy of increasing the rate of unemployment. On this occasion the purported reason is deficit-reduction. But the content is the same. Cuts to public spending were combined with changes to the tax regime which favoured business and high income earners. This reduced aggregate demand via driving unemployment higher and average wages lower thereby reducing consumption demand.

The tensions inside the last Labour government arose because many, probably a majority of the Cabinet, led by Peter Mandelson and including Alistair Darling, wanted to emulate this approach. Their parting shot was the March 2010 Budget, described by its official author the Chancellor as ‘worse than Thatcher’. But the fact is that this budget was never implemented by New Labour. Instead, the prior Budget in 2009 increased government spending and investment. It was this that underpinned the recovery and the unusual improvement in employment.

The improvement in employment, like the improvement in the economy (and the reduction in the public sector deficit since) all flow from that policy decision. Had the measures adopted been bolder, their effects on employment, growth and the deficit would have been that much greater. However timidly implemented, this policy does begin to meet the objective needs of the economy as a whole. But it does not meet the imperative to increase profits.

It is perhaps a coincidence that the first increases in interest rates following the 1980s and 1990s recession were both precisely 15 quarters after the end of the recession (in July 1984 and September 1994 respectively). The current recovery is only 5 quarters in duration, and yet both Cameron and Osborne have been campaigning for higher rates , even if the contraction in Q4 GDP has made those calls more muted. The campaign is eagerly echoed by City pundits. This is not because this recovery is stronger than its predecessors- it is significantly weaker .

The stated objective of the higher rates policy is to halt the rise in inflation. The latest data show that on the broad Retail Prices Index (RPI) measure inflation is 5.1%. But the effects of increases in indirect taxation have been to raise the price level by 1.6%. The Bank of England Governor Mervyn King, writing to the Chancellor to explain the overshoot refers primarily to the global rise in commodities’ prices as the driver of inflation. It is possible that higher interest rates could curb the growth of imported price inflation by raising the value of Sterling. But the appreciation of the currency could only be short-lived if, as seems likely, a tighter monetary policy acted to dampen growth even further. The official response to higher prices should be a series of administrative measures to lower them, including a reversal of the decision to hike VAT but also in the regulation of utility and transport prices.

At the time of writing, financial market expectations for higher short-term interest rates are approximately that the base rate will be 1.5% by year-end, representing four interest rate hikes of 0.25% each. These expectations have themselves been gyrating wildly, especially as King’s letter to Osborne seemed to imply that hitting the inflation target over the medium-term would require adopting the financial market’s aggressive assumptions on interest rate hikes.

This comes close to outsourcing the normal setting of interest rates from the unelected technocrats of the Monetary Policy Committee directly to the interests of the financial markets themselves, close to the system adopted by the Swiss central bank. This would be a thoroughly regressive step, codifying the City’s dominance over key aspects of policymaking in its own interests – and one not even contemplated by Thatcher or Major.

But it would complement the general thrust of policy, which is an increasingly vicious project to drive down the living standards of the overwhelming majority of society in order to boost the profits of capital, and in Britain its dominant section, the banks.