Supporters of government austerity measures have been quick to claim that recent revisions to GDP growth show a much shallower recession and much stronger recovery than previously thought. These claims are factually incorrect. The Office for National Statistics (ONS) accurately summarised the effect of its revisions as follows,

“Although the downturn in 2008-2009 was shallower than previously estimated and subsequent growth stronger, the broad picture of the economy is unaltered. It remains the case that the UK experienced the deepest recession since ONS records began in 1948 and the subsequent recovery has also been the slowest.”

The current situation for the British economy is characterised by an exceptionally weak recovery. The actual increase in output is minimal, much worse than any previous recovery. The very slow improvement in GDP is a product of more people working longer hours for less pay.

Fig.1 Output Per Hour and trend 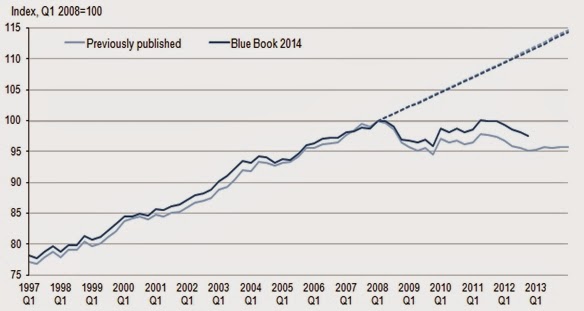 It should be noted that productivity had been growing very moderately from the end of 2009 until the Coalition’s austerity policies began to take effect at the beginning of 2011. There has been no recovery since.

This is far worse than any previous recovery, as shown in Fig.2 . It is unprecedented in Britain for productivity to be lower than the pre-recession peak 6 years previously. But that is what the previous estimate (unbroken black line) shows. The more recent revision (broken black line) is slightly better but is unlikely to alter the main trend. 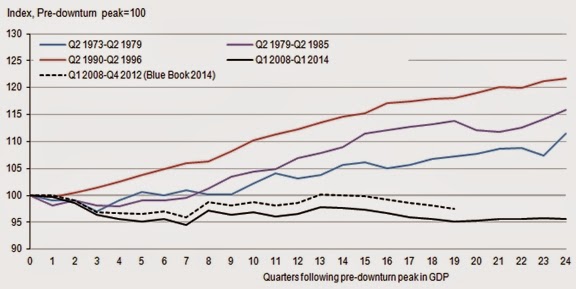 In the average of previous recessions and recoveries, productivity was 16.3% higher 6 years after the recession began. The complete data for the current slump is yet to be published. But if it is still below the pre-recession level (as seems likely) then the gap between the current trend in produtivity and the recovery from previous recessions could be in the order of 17% or 18%. There is also no sign of improvement.

If output per hour does not increase it is exceptionally difficult for average pay to increase. That would require a sharp rise in labour’s share of output, which is extremely rare when output is not expanding. This is the cause of the wage crisis in the British economy.

In a market economy there are also great difficulties in raising social expenditure when there is no growth in productivity. In any event is impossible to both raise wages and increase spending in education, health, transport, housing and so on if there is no increase in output per hour.

The cause of the productivity crisis is no puzzle. Just as a heavy load can be lifted much more quickly by machinery than by hand, productivity increases with the amount and sophistication of the capital machinery that is used. Cutting back on that equipment, by refusing to invest and/or letting existing machinery dilapidate will reduce output per hour. This is what has happened in Britain and many other western economies.

The argument that all that is required is increased demand is false. The final up-to-date data for the British economy will certainly show that demand, both household and government consumption have recovered since the recession. But investment has not. Increasing consumption by reducing investment is the road to impoverishment.

Private firms do not exist to satisfy demand, but to accumulate profits. Currently they remain uncertain about profits, and there is growing opposition to increased private investment.

But government has no such constraints. It can invest because the investment is necessary and reap returns not available to the private sector in the form of increased tax revenues and lower social security payments. State-led investment is needed before the crisis can be ended.