The Tory manifesto election pledge to make housing associations sell their homes at a discount and force local authorities to sell off some of their best stock has been widely condemned by the associations themselves and by housing experts. The government has set aside £1 billion to fund the discount available to the new ‘right-to-buy’ owners and will demand that the housing associations build replacement homes, which do not have to meet affordability criteria. The net new money available for homebuilding is therefore just £1 billion.

Using average construction cost estimates from the National Association of Home Builders of £150,000 per home, this equates to just 6,600 homes. Very few or none may be affordable.

The idea of bribing a tiny number of housing association tenants (and some of the few remaining local authority ones) with public money to become owner-occupiers is part of the policy of privilege to bolster the Tory election campaign. But since the majority of these homes tend rapidly to become part of the private rented sector it will also exacerbate the growing inequality and unaffordability of housing.

It does nothing to address the housing shortage in Britain, which is both chronic and in many parts of the country acute. Fig.1 below shows the level of both new ‘social rent’ housing and total affordable homes from 1991 to 2014. It is necessary to include at least these two categories in order to indicate some general trends as the government has changed the definitions of many categories of housing with the effect of obscuring to wider picture. 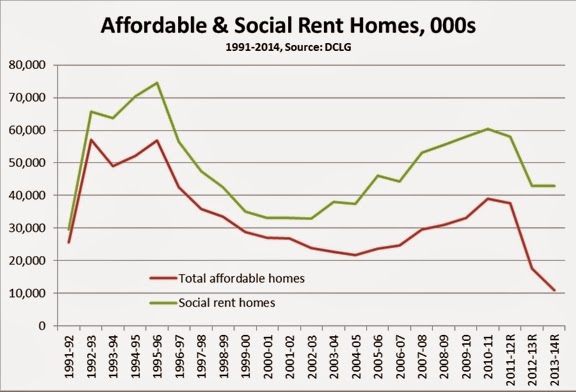 To give an indication of how grossly inadequate this is, the number of (loosely-defined) new affordable homes of all types was just under 43,000 last year and compares to 1.368 million households on local authority housing waiting lists in England alone.

The recent peak level for annual new affordable homes was just over 60,000 and was inherited by this government from the previous Labour government. The official projection of new household formation over the next 25 years is an average 210,000 per year (pdf). While not all of these households will want or need social or affordable housing, the majority will. Therefore the current pace of home building is completely inadequate to meet the additional projected demand. It will do nothing to address the backlog on waiting lists and the housing crisis will deepen.

There are many addition costs to the housing crisis simply beyond the extremes of unaffordability. These include the miseries of overcrowded and substandard housing, the increasing transfers of household incomes to landlords and the distortions to wider society, including the workforce. The much-discussed ‘productivity puzzle’ (pdf) is much less baffling when it is noted that under this government the rise in real estate jobs has far outstripped the rise in construction jobs, as shown in Fig. 2 below. 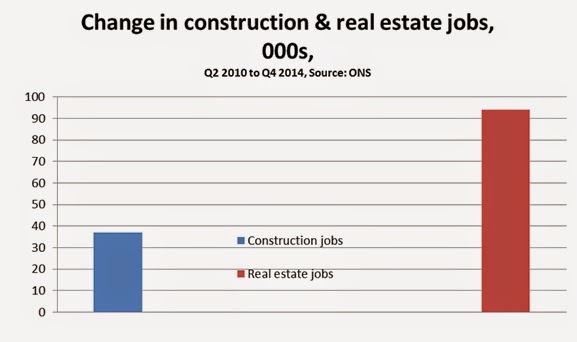 Solutions to the housing crisis

Labour has adopted a policy of aiming for 200,000 new homes per year by the end of the next parliament. This would come close to meeting the projected rate of new household formation. This would also have the effect of moderating the rise in house prices. But it would be unlikely to reverse it, especially as the housing shortfall as indicated by local authority waiting lists would have increase to beyond 1.75 million for Britain as a whole in the meantime.

One of the many myths surrounding government policy is that the state is not intervening in the economy. The reality is the opposite. There are innumerable ways in which this government and its predecessors intervene in ‘the markets’, with costs running into the hundreds of billions of pounds. The bank bailout was only the most spectacular example.

In the housing sector this government has intervened repeatedly in order to boost prices without ever boosting the construction of new affordable homes, which has decreased. Perhaps the most notorious of these schemes is the £40 billion ‘Help to Buy’ policy which uses public funds to boost private property prices which were already excessive.

A radical step that the next Labour government could take is to use this same £40 billion guarantee and offer it to local authorities to build new homes. The first 20% of (unlikely) local authorities’ losses on construction of affordable homes could be guaranteed using these funds. At the same time, government could borrow to increase the funds available for construction.

The arithmetic of borrowing to invest in new public affordable housing is simple and compelling. A 5% rental income on a £150,000 home amounts to £625 per month. A 3% yield requires just £375 per month. Yet the government can now borrow at well below even 3%. It would make money on its housing investment, which could be used for investment in other areas, all of which would see the deficit fall as a consequence. Housing affordability (and quality) would improve and job-creation switch from estate agency towards building.

The big losers from a radical policy would be private landlords who no longer benefit from the upward spiral of house prices and the large ‘house builders’, the companies who do not build homes but sit on undeveloped land banks and count the paper profits of the increasing land and home values.