During the current crisis the UK has experienced the longest-ever recorded fall in living standards. The biggest part of that fall is not the cuts to government spending, even though these have had severe effects. Instead the largest factor contributing to the fall in living standards is the decline in real wages. The Resolution Foundation calls this decade the worst for falling pay in over 200 years.

This fall has now resumed once more because of the combination of stagnation in wage growth and rising prices. The rise in prices is a Brexit effect, after the sharp devaluation of the pound following the referendum result in June 2016. It is ridiculous for Theresa May to suggest the falling pound and therefore the fall in real wages, is not the result of the Brexit vote. 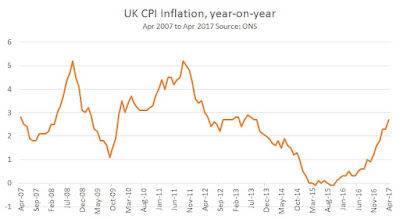 Mainstream economists, including the former and current chairs of the US central bank bemoan the fact that wages are often ‘sticky’. This means that ordinarily, outside ferocious attack, authoritarian dictatorship or worse, it is hard to get workers to accept cuts in their pay in cash terms. This is regarded as a necessary condition for capitalist recovery, as wages fall and profits rise. But the most effective way of driving down real wages is to hold wages down and let prices rise. This can be supplemented by other factors, such as freezes to the pay of the public sector and casualisation of the workforce. This is what has happened.

As Chart 2 shows, the pace of the fall in real wages in the UK currently has begun to resemble the decline at the start of the recession. It is precipitate. The 1-month data and the 3-month average are both shown. The latter is highlighted by the Office for National Statistics (ONS) as it smooths out fluctuations. This now shows real wages declining once more. But the 1-month data is useful in highlighting turning-points, as SEB has previously argued. On this measure, real wages are down 0.5% from a year ago. With further devaluation-induced price rises in the pipeline, the fall in real wages has much further to run. 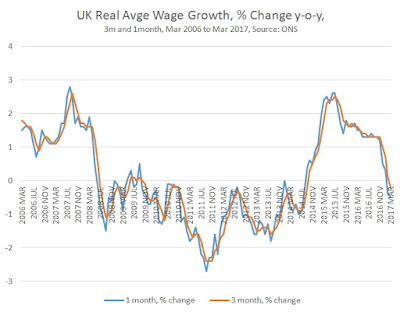 The cumulative scale of the decline in real wages over this crisis is shown in Chart 3 below. On a monthly basis, real weakly wages peaked at £531 in February 2008, just as the recession was about to begin. They had fallen to £497 in March of this year.

The peak in wages was in part because wages are ‘sticky’, they were still rising even as the economy was just about to slump and prices had been slowing. There was also the last hurrah of the financial boom, and reflects the City bonuses paid then.

In essence the whole of the austerity policy can be understood as a conscious effort to overcome this stickiness, that is to drive down wages and to get workers and the poor to bear the brunt of the recession while allowing big business and the rich to be shielded from it. There are currently just under 32 million in workers in the UK. As already noted, average real weekly pay has fallen since just before the recession by £34. Even if we take the less erratic quarterly data, it has fallen to £496 from £520 in the 1st quarter of 2008. This is a real fall of £24 per week, or effectively a fall of £1,250 per year. For 32 million workers that is approximately an aggregate decline of £40 billion in real wages from the 1st quarter of 2008 to the same period in 2017. Even if only the 23.5 million full-time workers are considered and part-time workers ignored entirely, the fall in their real wages amounts to over £29 billion.

This may seem strange, given the harsh burden of austerity that hits workers and the poor. But the rise in real Government Consumption reflects the almost inescapable rises in government spending, on items such as pensions, the NHS, education and so on, even where these do not keep pace either with growing demand or the specific inflation in those sectors. The latest Tory Manifesto, with cuts to all types of social welfare is an attempt reduce these outlays, while maintaining tax cuts for the rich and big business.

But the maths are plain. The biggest factor in driving living standards lower is the fall in real wages. This has now resumed. The Tory Government will be hoping to turn that to good effect using the fall in wages to drive up the profit rate, where they previously failed. At the same time it will reduce the automatic rises in some areas of the Budget, further reductions on those areas of spending which otherwise rise automatically.

This Tory plan is built around a Hard Brexit. Leaving the Single Market will hurt both wages and profits, as trade barriers are introduced and investment is diverted towards larger markets. In those circumstances, the Tories are attempting once more to ensure that the greater share of that loss is on wages, not profits.

By contrast, this Labour leadership is opposed to austerity in all its forms. It will attempt to shield workers and the poor from the crisis and therefore should be wholeheartedly supported even on those grounds alone.

Some on the left reject these arguments on wages, and refuse to accept that Brexit is driving living standards lower. This is an error, reflecting their misconceived support for Brexit. The left should always be the best defenders of living standards for the overwhelming majority of society, and propose arguments that would reverse the falls that are imposed during a crisis. To do that, it must first recognise reality, that real wages are falling once more from a combination of stagnant cash wages and rising prices caused by the Brexit currency devaluation. Any sober assessment would suggest that further falls in wages and living standards must be expected as the Tories attempt to get workers and the poor to pay for the Brexit crisis.

The big trade unions are sure to offer resistance to the new offensive, as will this leadership of the Labour Party. The same cannot be said of any of Corbyn’s opponents in the Parliamentary Labour Party, who either embrace austerity or offer fake opposition to it.