It is crucial for both economic and geopolitical perspectives to have an accurate analysis of trends in the US economy. The publication of the latest revised US GDP figures is therefore important as it provides the latest opportunity to verify these developments. This data confirms the fundamental trends in the US economy under Trump:
This article analyses these economic trends in detail, considers some of their geopolitical consequences, and their impact on domestic US politics.

US GDP and per capita GDP growth 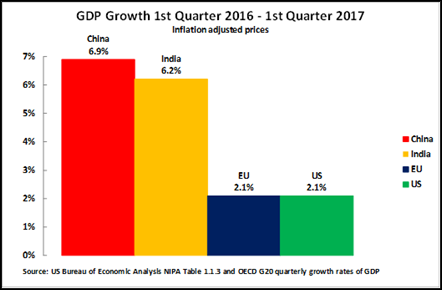 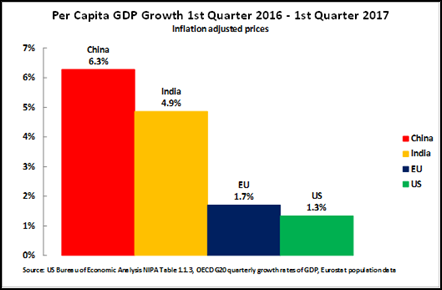 In order to accurately evaluate the significance of this latest US data it is necessary to separate purely business cycle trends from medium/long term ones – as market economies are cyclical in nature failure to separate cyclical trends from long term ones may result in seriously distorted assessments. Purely cyclical effects may be removed by using a sufficiently long term moving average that cyclical fluctuations become averaged out and the long term structural growth rate is shown. Figure 3 therefore shows annual average US GDP growth using a 20-year moving average – a comparison to shorter term periods is given below. 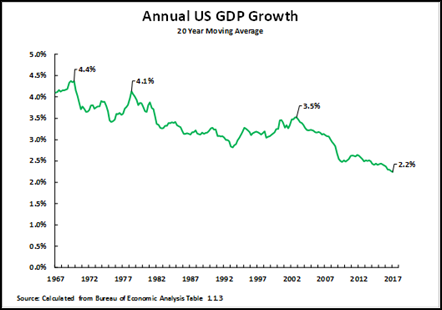 Cycle and trend
Turning from long term trends to analysis of the current US business cycle, it may be noted that a 5-year moving average of annual US GDP growth is 2.0%, a 7-year moving average 2.1% and the 20-year moving average 2.2%. Leaving aside a 10-year moving average, which is greatly statistically affected by the severe recession of 2009 and therefore yields a result out of line with other measures of average annual growth of only 1.4%, US average annual GDP growth may therefore be taken as around 2% or slightly above. That is, fundamental structural factors in the US economy create a medium/long term growth rate of 2.0% or slightly above. Business cycle fluctuations then take purely short-term growth above or below this average. To analyse accurately the present situation of the US business cycle therefore recent growth must be compared with this long-term trend.
Figure 4 therefore shows the 20-year moving average for US GDP growth together with the year on year US growth rate. This shows that in 2016 US GDP growth was severely depressed – GDP growth in the whole year 2016 was only 1.6% and year on year growth fell to 1.3% in the second quarter. By the 1stquarter of 2017 US year on year GDP growth had only risen to 2.1% – still below the 20-year moving average.
As US economic growth in 2016 was substantially below average a process of ‘reversion to the mean’, that is a tendency to correct exceptionally slow or exceptionally rapid growth in one period by upward or downward adjustments to growth in succeeding periods, would be expected to lead to a short-term increase in US growth compared to low points in 2016. This would be purely for statistical reasons and not represent any increase in underlying or medium/long US term growth. This normal statistical process is confirmed by the acceleration in US GDP growth since the low point of 1.3% in the 2nd quarter 2016 – growth accelerating to 1.7% in 3rd quarter 2016, 2.0% in 4th quarter 2016 and 2.1% in 1stquarter 2017.
Given the very depressed situation of the US economy in 2016 therefore some increase in speed of growth may be expected in 2017 for purely statistical reasons connected to the business cycle.
Figure 4 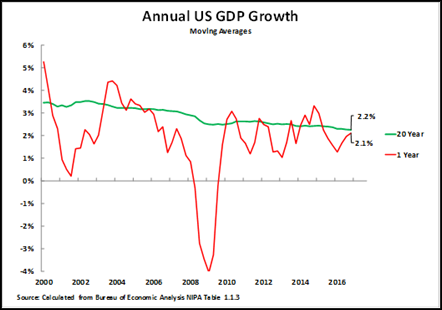 Conclusion
The economic and domestic US political conclusions of the trends shown in the latest US data are therefore clear
In terms of geopolitical consequences affecting China:
To keep this article short only a factual summary of the key recent trends within the US economy are given here. A detailed analysis of why the US remains locked in slow medium and long term economic growth is given in my article  Why the US economy remains locked in slow growth  A long term historical analysis of US growth and its relation to economic growth theory may be found in my book The Great Chess Game (一盘大棋? ——中国新命运解析).
*   *   *
This is a slightly edited version of an article that was originally published in Chinese at New Finance, which was previously published here.
Share