The latest release of key data for Northern Ireland (NI) has had business organisations wringing their hands about the weakness of the economy. The CBI said the economy “looks to be on the brink of recessionary territory” after the economy contracted in the 1st quarter of 2018. In fact, the economy has contracted in three of the last four quarters.

But this is not a short-term problem. Over the longer run, it is clear that NI economy has never recovered from the Great Recession. It remains in a crisis.

Chart 1 below shows a comparison of overall growth rates for NI, Scotland, for the UK and for the Irish Republic (RoI). It is reproduced from the Northern Ireland Statistical Research Agency (NISRA). 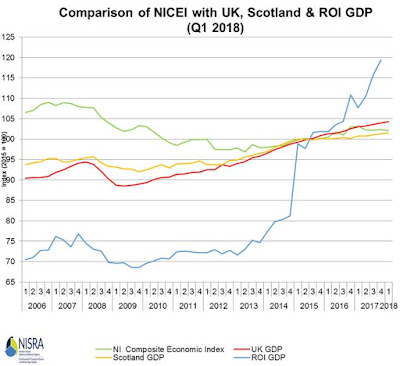 The Northern Ireland Composite Economic Indicator (NICEI) is very far from being as authoritative as a measure of GDP. But it is the most advanced measure so far developed, and movements in the Index are likely to be good indicators of the trends in NI output overall.

Even if the data for RoI is disregarded entirely, based on the widely remarked upward distortions to GDP, the comparative performance of the NI economy has been miserable. This is despite the fact that UK-wide and Scottish growth rates have themselves been extremely weak over the period.

[The economy of the RoI has hugely inflated GDP levels, based on the government policy of attracting spurious investment from overseas, which is in reality a tax avoidance scheme. As a result, much economic data is meaningless. However, on one real measure RoI’s total real wages have risen by a very slow 7.4% over the last 10 years. Yet even this miserable level compares favourably to -3.75% for the UK over the same period].

As the Table shows the NI recession lasted 3½ years to 4 years longer than elsewhere. The NI recession only ended in the 2nd half of 2013. The recovery since that low-point has also been minimal. And the level of output in the NI economy still remains more than 4% below its pre-recession peak. The other economies have all recovered, at least to some extent.

Looking wider, most of the EU countries hit hardest by the Great Recession have made some sort of recovery, including Spain and Portugal. Italy is one of the worst-performing major economies in the world. Since the 1st quarter of 2006 the Italian economy has contracted by 2.4%. But the NI economy has been even worse. Only the ravages inflicted on Greece in the interests of its creditors put it in a separate category, having contracted by 21% since the beginning of 2006. 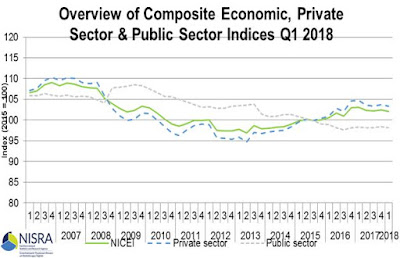 This highlights the structural problem of the NI economy as a whole. Its natural link is the RoI economy, especially via the private sector in NI. But the public sector in NI remains dependent on the parsimony of the Westminster government, which refuses to invest and insists that the private sector will, without any evidence.
A refusal to invest is hardly unique to NI among the Western economies. The entire OECD economy remains in an investment blight. This characterises the period we are in.
But the NI economy faces a longer-term, structural problem. When NI was created in 1922 it was part of the British Empire, which was still a globally sizeable market, even while it faced with mounting competitive challenges. NI shipping, manufacturing, linen and banking were an important component of the Empire’s output. But the Empire is long gone. Most of those industries in the North have gone with it.
Now, the world has three major economic units, the US, China and the European Union Single Market which together account for roughly 60% of the world economy. NI’s links to the EU Single Market now face severe disruption via Brexit. It will be left as an adjunct of the UK economy, which represents now just 2¼% of world GDP (according to World Bank data), and continues to decline. The latest decline in NI economic activity is a pointer to those strategic difficulties. The NI is suffering a declining participation in the world economy. Brexit will accelerate that.
The private sector in NI has already begun to anticipate the potential effects of Brexit, where the simple size of the UK market means there is only limited rationale to invest, for any enterprise, wherever its ultimate location. The incentive to invest in NI is even more curtailed than for the UK. The Westminster government has exacerbated these trends both through the ill-conceived Brexit policy itself, as well as its own repeated refusal to invest in the NI economy.
Share